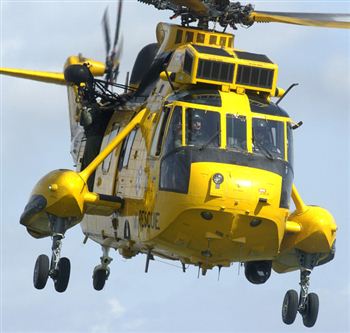 The Scottish Ambulance Service sent two vehicles to ensure they reached the 63-year-old woman, who suffered a suspected heart attack at her house in Peebles, but were unable to use either roads leading from her rural home after heavy snow fell on the area.

An RAF helicopter flew up from the north of England to airlift the woman while ambulance crews worked to stabilise her.

Once the Sea King landed it had to wait before it could take off again as conditions worsened in the south of Scotland.

A spokesman for RAF Search and Rescue said: “An RAF helicopter was requested to assist the ambulance service with a 63-year-old woman suffering from a suspected heart-attack.“A Sea King helicopter from Annick in Northumberland flew to Peebles, where it landed in an emergency helicopter landing site.

“The patient was stabilised but the helicopter had to sit on the ground for around 15 minutes until the conditions were suitable to take off.

“It then left at 1.30pm and transported the woman to hospital in Melrose in the Borders, which took around 20 minutes.

“The helicopter sat on the ground for some time while the weather conditions improved, but stayed on stand-by at the hospital in case it was needed further.”

A spokeswoman for the Scottish Ambulance Service said: “We managed to get the vehicles to the patient but the roads to both Edinburgh and Peebles had become impassable during the morning, so we requested assistance from the RAF.

“The helicopter landed across from the house, and flew the patient straight to the helipad at Borders General Hospital.”