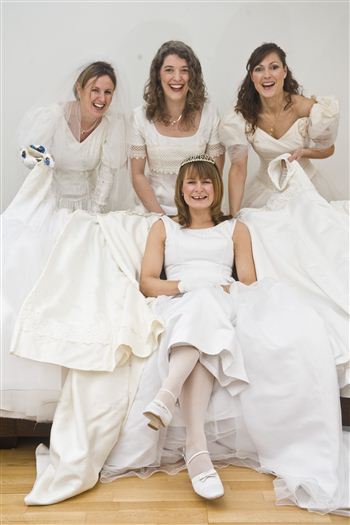 IT IS among the most expensive purchases a woman will ever make and spends most of its life in the cupboard.

But now 20 Scots brides have chosen to send their wedding dresses thousands of miles away to Africa – so they can have a another big day.

The women, who are from in and around Edinburgh, will send them to Uganda to give brides-to-be a special surprise when they tie the knot.

Janice Jack, from Barnton in Edinburgh, contacted the Jireh Women charity after reading about the plight of women in the war-torn country.

The 41-year-old said: “I asked around 20 of my friends if they would be willing to give their wedding dresses away and they said they would.

“They had to think about it and it was a hard decision.

“My sister and I had scoured the whole country looking for the right dress.

“But I just thought, ‘this is something that’s lying in my wardrobe that could actually help these women.’

“My friends thought if we could do something like that to help it would be amazing.

“I was blown away by their response, it’s not like just asking someone to put £20 in an envelope to help a charity.

“It’s something that’s very sentimental and probably one of the most expensive things you’ve bought, so it’s a big ask.

Janice and her friends are having one last wedding dress party before they send the dresses to Uganda.

The dresses – some of which cost more than £1,000 – will be sent to several shops around the country and reused to allow many women to have one on their big day.

She added: “It’s just so amazing; before the women worse jeans and a top on their wedding day, so for them to have a wedding dress is really special.

“We want to make the women realise that even though they’re on the other side of the world, we do care about them.

“The rebels that went into their villages during the civil war killed their husbands and fathers and took them as their partners.

“The devastation caused in these girls’ lives is the main reason why we want to send them out dresses, not just because it is a poor country.

“It’s really to say ‘you deserve better’ – a wedding day is a new start for them.

“I said to the girls we will have a night in with our dresses – if we can fit into them.

“I think I will miss the emotional attachment to the dress, rather than the dress itself, but the joy that they will bring to these women will far outweigh that.”