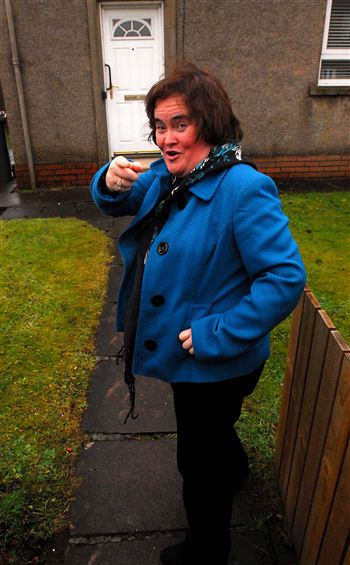 SHAKEN superstar Susan Boyle has vowed she won’t be forced to flee her family home after confronting a late night intruder in her house.

The Scots singer returned from London late on Tuesday night after recording a charity single for Haiti earthquake victims.

After opening the door of her council house in Blackburn, West Lothian, she discovered a man dressed in black roaming around inside.

He barged past her and a pal before fleeing into the night, leaving the 48-year-old distressed and shaken by the ordeal.

Susan was left unhurt, but deeply disturbed on finding that the mystery man had been in long enough to have gone through her things.

But last night she put a brave face on her ordeal, and said: “I’m not going anywhere.

“Nobody’s pushing me out of my house.

“I think he got more of a scare than I did because he ran off.”

She added: “It is quite worrying, quite disconcerting for everyone. “But the matter is in hand.

“The police have been really good about it. They’ve been very excellent.”

Police were quickly on the scene after the 9.50pm drama on Tuesday and quickly detained a 16-year-old in connection with the incident.

He was later released, but detectives revealed yesterday that he has not yet been ruled out of their inquiries.

No details were released about the suspect.

However fears have also been raised that the culprit could be a stalker or someone with a copy of her keys.

One friend was quoted saying: “Susan got home to find an intruder halfway up her stairs.

“She was with a female pal who was dropping her off.

“Her pal only expected to be with her for a couple of minutes, but it is just as well she was.

“The guy has seen her come in and bolted out straight past Susan.”

Susan’s home has become a Mecca for fans visiting from around the world desperate for a chance to meet the singer in person.

A panic button was reportedly installed around Christmas time after she had reported two people peering in at night through her back window.

Yesterday locals described how three police squad cars arrived on the scene within minutes of Susan raising the alarm.

Neighbour Brian Smith, 51, who lives opposite the singer, said he saw her alarm go off.

He said: “My blinds were closed but there was a flashing light in the street.

“I thought it was headlights, but when I had a look it was the alarm – it doesn’t make a noise it just flashes.

“The police came to my house at about 11pm and asked me if I had seen a stranger – a man dressed in black.

“I hadn’t seen anything because the blinds were shut.

“There were three police cars and officers were out asking all the neighbours.

“Just after they left a council repair van arrived and went into the house.

“A car left Susan’s house just after Midnight but I didn’t see who was in it.”

Detectives are now convinced the person they are looking for could be a teenager and appealed for help in tracking him down.

But they admitted the intruder could have been a stalker with his own set of keys to her house after the officer leading the enquiry, Detective Constable Brian Thompson, said they could find no signs of forced entry.

DC Thompson said: “She was certainly very disturbed at the time of the incident although she is now back in her house just now and she is quite comfortable.

“It is certainly not forced entry and enquiries are continuing as to how this person has gained access to this property.

“There is no sign of forced entry, there is a possibility her door has been left open.”

Asked if the intruder could have had a copy of a key to Susan’s home, DC Thompson said he could not rule it out.

When asked if the intruder had been a stalker he said: “I could not rule that out either. We have arranged for locks (on the house) to be changed.

“Obviously with the lady’s publicity now could well be someone who is interested in her career etc, we can’t rule that out.”

Asked whether friends and family had been asked about the incident he said: “We have explored that.

“There is certainly no suspicion falling on friends and family.

“She has a close knit circle of friends and family looking after her.

“We have obtained statements from the relative people and certainly there is nothing that is concerning us.”

DC Thompson said the intruder had been in the upstairs of the house when Susan had arrived home and “brushed past” her on his way out.

But he said that nothing had been taken and it had been difficult to say what rooms the man had been in or if he disturbed anything.

The house had not been vandalised either.

DC Thompson said: “We had a search of the premises with the occupier today (Wednesday) and it appears that nothing has been taken.

“It is difficult to say just now (what rooms he was in), certainly he emerged from the upper floor.

“It would appear that whoever has been in has been in for a short period of time and the occupier has returned.”

When asked if the rooms had been disturbed he said: “Nothing apparent that she can pin point just now.

DC Thompson said Susan had described a suspect in a statement to officers and corroborated by a friend who was dropping her off at the time.

He added: “The person who we are looking for has been described as between 16 and 18 years old. He is a white male approximately 5’7’’ tall with dark hair and dark clothing.”

Speaking about a young man detained following the incident but released shortly after, DC Thompson said: “They are released pending further enquiry.

“They have not been ruled out at this stage.

Officers spend much of yesterday morning investigating the scene.

After spending the night with relatives, she arrived home with niece Joanne Crawford at around 10.30am to let forensic officers in.

But they didn’t have a key for the modest council house and had to leave.

The three forensic officers – two men and woman – returned 15 minutes later carrying their cases and entered the property by the side kitchen door.

Susan joined them again at 11am arriving in her niece’s blue Citroen C4.

She later spent the day with relatives and speaking with neighbours and journalists.

The scare is just the latest in a series of fears over Susan.

Last year a minder was posted to look after SuBo as her popularity grew, following her around on shopping spree and trips to London.

Later a security firm was appointed to improve the safety of her home which now has lights which illuminate whenever people go near.

Concerns have also been raised recently about how she us coping with fame after public dust ups on a number of occasions.

She also still insists on taking public transport and visiting her favourite local shops, despite her new found popularity.

It was thought she has so far made an estimated £5 million from her debut album I Dreamed A Dream.

Previously she has said she wants to buy the house  – her childhood home – from West Lothian Council.