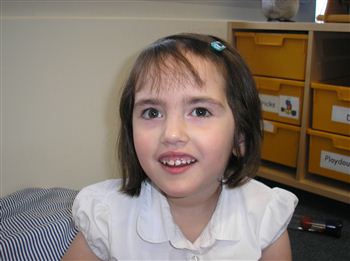 A BRAVE six-year-old girl has been given the all-clear after undergoing EIGHT brain operations in a bid to stop the epileptic seizures she was suffering from.

Little Millie MacKenzie was hailed a “miracle” by her mum after beating the disease, which she has suffered from since she was just six weeks old.

Millie – from Dunfermline, Fife – suffered from as many as 20 fits every day and in one pioneering procedure had a quarter of her brain removed by surgeons.

But now Millie is fighting fit and mum Kelly said it was like her little girl has been “reborn” after a brain scan showed her mind was working normally.

“It’s like she’s been reborn and it’s just fantastic to see.

“She’s a little girl with personality and attitude now and she’s never been like that before.

“She was quite quiet and withdrawn before but she’s certainly making up for it now.”

Millie’s ordeal began when she was just six-weeks old and scans showed her abnormal brain activity.

Suffering up to 20 seizures a day Millie was given just a 30 per cent chance of ever being fit free until a pioneering operation at Great Ormond Street Hospital almost exactly one year ago.

Kelly added: “We went down to Great Ormond Street nearly a year to the day since her surgery as they said they would like to do a follow up.

“They repeated all the tests that she had done before the surgery – it was pretty nerve-wracking.

“We weren’t seeing any seizures but we didn’t know what was going on inside.

“We always hoped that they would turn round and say everything is great and this time there was no ‘but’ at the end.

“She’s had EEGs (electroencephalograms) since she was six weeks old and every one of them has been abnormal so to hear that Millie has had a clear EEG from the professionals is just fantastic.

“As the doctor said, his work here is done.”

The family – dad Mark, 37, and sister Robyn, 19 – have been keen to praise the efforts of medics who helped their daughter.

Kelly added: “We have to thank everyone at the Sick Kids Hospital in Edinburgh for sending us down to Great Ormond Street.

“Dr Eunson has been Millie’s consultant since she was six weeks old and we’re indebted to him as he made the brave suggestion to move us down to Great Ormond Street.”

The family will be able to celebrate Millie’s great news in style after winning an online competition in November for a holiday in Disneyland Paris.

And organisers have made sure the once-in-a-lifetime trip falls on Millie’s birthday in April.

Kelly said: “We are going to try and pack as much as we can into the three days we have there – we are really looking forward to it.

“Millie really loves Winnie the Pooh so hopefully we can arrange for her to meet the characters and have a Winnie the Pooh birthday cake – that would just be so wonderful for her.”