Body found washed up on beach after storm 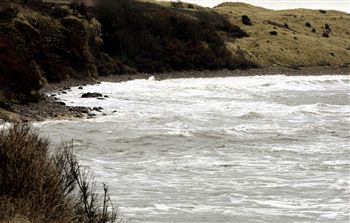 POLICE are investigating after a passer-by found a body which was washed-up on a beach in East Lothian yesterday morning.

The remains – which have not been identified – were found by a member of the public on a beach in North Berwick at around 10.15am.

Coast guards and police officers retrieved the corpse and forensic teams swooped on the sea-side town, popular with golfers.

The grim find was made close to the Renaissance Golf Club.

A spokesman for the links course said: “There was a body found on the beach this morning. The beach isn’t part of the club.

“The police have been coming and going since this morning. There were uniformed officers and forensic officers and the coast guard were here earlier.”

Lothian and Borders Police said enquiries were at an early stage and a full forensic investigation was to be carried out to establish who the body was and determine the cause and nature of death.

However they said that the discovery was not yet being treated as suspicious.

A force spokesman said: “We are making enquiries now to establish identity and the circumstances that led to the discovery of this body.

“Anyone with information that can assist with our investigation is asked to contact police immediately.

“No further details will be released until the body has been identified and next of kin have been informed.”

A spokesman for Forth Coastguard said they assisted in retrieving the body.