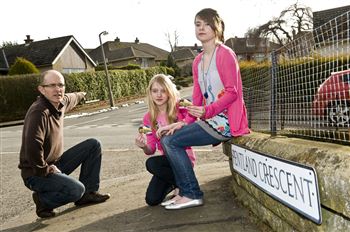 A FAMILY may have to fork out more than £600-a-year to get their two daughters to school after a rule change left them too close to qualify for free travel.

Mike Howard and his kids have been left one street outside of the local catchment area for a free bus to travel the 2.9 miles to St Thomas of Acquin’s in Edinburgh.

His daughters Mhairi, 14, and Beth, 12, used qualify for free travel but under new council plans to cut costs the boundary will restricted from a previous two miles to three.

Local councillors say they have been bombarded with calls from angry parents demanding to know why their children are to trek up to three miles each way across town every day.

Mike, 41, is among the hundreds of parents across the city that could be forced to pay £28-a-month per child for a bus pass due to Edinburgh City Council’s new cash-saving measures.

The 41-year-old said: “We are the outlying part of the catchment so it’s affecting a lot of people who live here and at Buckstone.

“They may as well have just added an extra £56 to my council tax every month.”

At nearby Boroughmuir High about 200 pupils have been affected by the changes.

Tracey Murray, whose two children will be going to the school after the summer holidays, says the route from Buckstone is too long and unsafe to walk.

The 42-year-old said: “It’s an unmanageable walk for children, especially when they have heavy books in their bags.

“The road is also very busy and the cars travel at 40mph so it’s too fast for them to stop if children walk out on to the road.

“I would rather spend the money on other things to help my children’s education than paying for travel.”

Another parent, Gordon Kinnear, 46, said he will have to drive his three children to their two different schools by car every morning because he can’t afford to pay for three £28 bus passes every month.

He said: “I’m effectively looking at a pay cut to pay for this and we can’t afford it.

“The only economic option is to take the car and that’s only going to lead to the roads being even more clogged up.”

Local councillor Ian Murray said: “You can’t ask kids to walk to a school that is 2.9 miles away.

“I agree we need to have a policy of drawing a boundary around where people would get free travel, but to arbitrarily change that boundary puts pressure on family budgets.

“People are sending their kids to their catchment school, so they’re doing everything right but they are being penalised for it.”

A spokesman for Edinburgh City Council said: “We have a statutory requirement to provide transport for pupils living further than three miles away.

“Unfortunately, in these difficult financial times, that is all that we can afford to offer.”