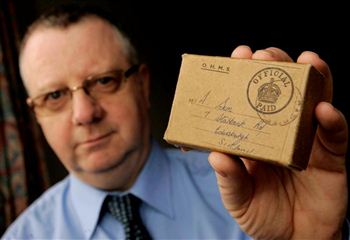 Navy man Alexander Sim earned four honours for his role transporting prisoners of the Second World War before his death in 1991.

His son James returned from holiday to find his “only links” to his father had disappeared after his flat was ransacked.

James, 53, said he could understand if thieves made off with his laptop computer or valuable camera, but asked: “Why the medals?”

On top of the four medals’ sentimental value, James can’t even contemplate their monetary worth.

He said: “It’s a horrible feeling to know that someone has been in your house like that.

“I went through to the bedroom and saw the drawer open where I kept my dad’s four war medals, and some of my mum’s jewellery, as well as my mother-in-law’s.

“They all died in the mid-1990s and that’s pretty much the only link to them we have.”

His father, Alexander, who died aged 78, helped ship troops and POWs across from the US and Canada in and out of Europe.

James said the hurt of losing such treasured mementos would have left his father “really sad.”

“He was very proud to have served”

He said: “I would ask him quite a lot as a kid about the War, but he said very little.

“He was very proud to have served, and would have been really sad about having the medals stolen.

“I can understand stealing the cameras and the laptops, and even some of the jewellery, because they can move that on, but why the medals?”

Police are now appealing for witnesses to the weekend theft from James’ flat in Edinburgh’s Newhaven area.

A Lothian and Borders Police spokesman said: “Obviously these medals have sentimental value to the householder, and we are keen for any information that can assist their safe return.

“The same applies to the other stolen goods, which includes jewellery, cameras and mobile phones.

“Anyone who noticed anyone acting suspiciously in the area of Jessfield Terrace last weekend, or who has any other information that can help our inquiries, should contact police immediately.”