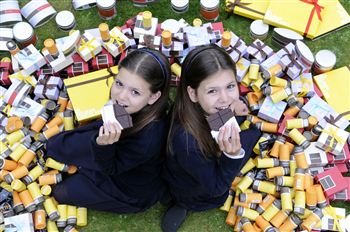 A PAIR of sweet-toothed twins were tucking into the first of 2,200 chocolate bars yesterday after they won the entire contents of a sweet shop.

Lucy Duff secured a chocolate windfall after she guessed how many bars were remaining in Edinburgh’s Kshocolat store following its closure in January.

Yesterday Lucy pledged to share at least some of the 22 boxes worth of chocolate with twin sister Emma and mum Rosemary to avoid tummy ache.

She said: “We went around the shop and looked at all the sweets, and I just picked a random number which I thought was pretty close.

“Then when we got back from our holiday a couple of weeks ago I saw a letter on the hall table.

“I couldn’t believe it when I read that I’d won the chocolate – I was jumping around everywhere.

“So far I’ve eaten some orange chocolates and some lavender chocolates, but I think it’ll take me ages to get through them all.”

Lucy, who lives in the city’s Morningside area, added that there was far too much for her to eat, and promised to put the chocolate to good use.

She said: “I’ll definitely be sharing them with my sister and I’m going to sell some at a school fair to raise money for charity.

“In particular I like animal charities, such as WWF.”

Lucky Lucy managed to out-guess the 900 people who entered the three-week contest.

Those entering were allowed to wander around the Gyle shopping centre store to try and count the remaining bars, before submitting their entry.

Among the traditional milk, dark and white chocolate were more unusual creations, including pepper, lavender and strawberry, along with champagne – which mum Rosemary said she would be keeping for herself.

The 45-year-old added: “I’m quite worried about fillings and gaining weight, but it’s good to know that we’ll never go short at Christmas or Halloween again.

“I don’t think I’ve ever seen so much chocolate, and it’s high quality chocolate too.

“We’ll definitely munch through some of it ourselves, then we’ll give a lot of it to the school to sell at their charity fair.

“Some will go towards a charity of the school’s choice and some to Lucy’s favourite charity.