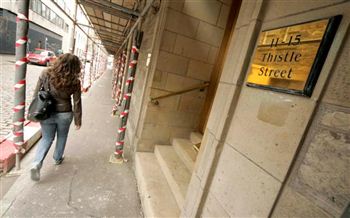 DETECTIVES probing the disappearance of Edinburgh bookkeeper Suzanne Pilley fear she is dead.

Senior officers broke the news to her devastated parents Robert and Sylvia that the hunt for their daughter had been upgraded to a murder inquiry before going public about the switch today (Wednesday).

But they said bravely: “Until we hear otherwise, we will always hope for some positive news.”

The move came after officers were handed CCTV footage which they say shows Suzanne DID arrive outside her work.

But what happened thereafter remains a mystery.

With no further “proof of life” available, a decision was taken to upgrade the inquiry – already being supported by the crack National Police Improvement Agency – to a murder investigation.

That allows those leading the hunt to deploy more resources and alters the focus of how the investigation is conducted. 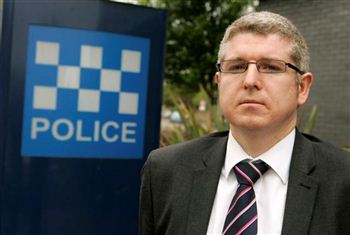 Detective Superintendant Stuart Houston said: “Our investigation has led us to believe that Suzanne has been murdered.

“The CCTV image we found shows her yards from her office door. We can’t be sure at what point any incident may have taken place.

“The image itself is unclear and we are working on it to see if we can get any more information from it.”

“We have more CCTV footage to go through and once again we are appealing for witnesses to come forward.”

He added: “We are following a number of lines of enquiry.

“Officers have been speaking to employees at Suzanne’s place of work as part of the investigation.

“We are still keen to explore all possibilities.”

Suzanne’s employers, Infrastructure Managers, are situated on Thistle Street just yards from a series of garages in the city which were searched by police forensic experts wearing white coveralls around a week ago.

They have now appointed Scotland’s largest PR company – Big Partnership – to handle media inquiries on their behalf while the investigation into their missing bookkeeper continues.

Outside their offices yesterday, a spokesman said: “We were informed this morning by Lothian & Borders Police that they were now treating Suzanne’s disappearance as a murder investigation.

“This is clearly a very distressing development for all her friends and work colleagues within the firm.

“We’ll continue to co-operate fully with the police in every way possible and hope that anyone with any further information about Suzanne’s disappearance will come forward.

“This is an extremely stressful time for her family and her many friends. We are very grateful for the support we’ve received from the police and others.” 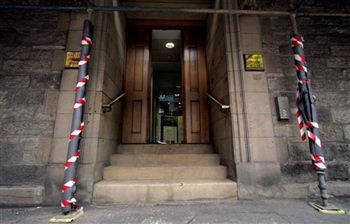 Until today’s developments officers had no real clue as to what Suzanne’s last movements were before she disappeared.

Officers trawled through more than 300 hours of footage captured from 60 CCTV sites to discover she took two buses to town from her home in the Stevenson area, stopping briefly at a Sainbury’s store on Rose Street.

The last known contact she had with anyone was a text to her parents at 8.38am and she was then spotted on CCTV at the corner of North St David Street, some 100 yards from her work.

No further images were available other than one showing a black cab driver in the area who was later ruled out of the inquiry.

But yesterday came grainy footage handed to the inquiry team confirms that she did then make it as far her work building at 8.55am.

Previous statements from police said they had been told she did not actually report for work.

Detective Chief Inspector Gary Flannigan, who is leading the inquiry, said: “Tracing Suzanne to Thistle Street on the morning she went missing is hugely significant in terms of this inquiry.

“It further proves this was a routine morning for Suzanne, and she was following her usual patterns – we suspect she may well have made it to her office as normal.”

He added: “This development means we are treating this as a murder investigation.

“The quality of the image is such that it needs specialist enhancement but we are satisfied through the clothing, its colour and the time scale in which the image was recorded that it is Suzanne.”

“We live in hope”

Few staff coming and going from the Infrastructure Management offices were willing to speak with reporters.

One said only: “We just hope she is found soon.”

Police posters plastered around streets and fences nearby served as a constant reminder that one of their own was still missing.

A team of six police officers in high visibility jackets spent most of the day speaking to workers at surrounding offices.

They also surveyed streets surrounding the Infrastructure Managers building, which has internal access to backdoor garages.

Police then left the Thistle Street area shortly before 3pm.

No-one was at Suzanne’s parents house yesterday as news of the murder inquiry being set up was broken.

But in a statement released through police, Robert and Sylvia said: “As a family we still live in hope of good news, and would still appeal for people up and down the country to stay vigilant and look out for Suzanne.

“We have, however, been kept informed of the way the police inquiry has been progressing, and deep down we do suspect something more sinister has happened.

“Suzanne would never put us through this kind of worry intentionally, so we can’t help but think she has come to some harm.

“Words can’t describe just how devastated we are at this time, each day we are overwhelmed by worry.”

They added: “Until we hear otherwise, we will always hope for some positive news.”

Suzanne was described as being white, 5ft 4ins tall, of slim build and short, light brown hair shaped into a bob.

She was wearing a light blue waterproof jacket; red fleece zipped to the neck, light blue trousers or jeans and trainers.

The 38-year-old, who is keen on keep fit, was also carrying a shoulder bag and a large water bottle when she was last seen.

•    Anyone with any information as to Suzanne’s whereabouts was asked to contact Lothian and Borders Police on 0131 311 3131.