THE ex lover of missing bookkeeper Suzanne Pilley found himself hanging out to dry today (Tues) – as police stepped up their hunt for his missing work colleague. 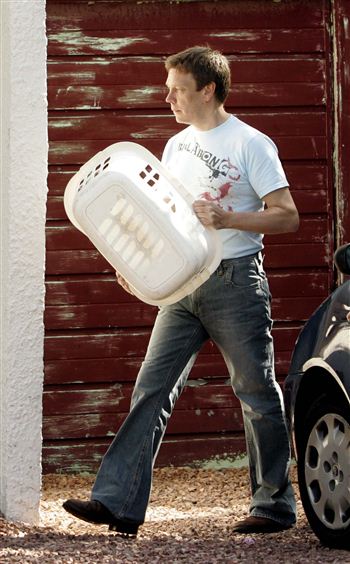 David Gilroy spent the day at his Edinburgh home carrying out domestic chores and braved waiting reporters only long enough to hang out some washing in the back garden of the Silverknowes property.

He refused to answer questions about the continued police probe into the death of his former mistress as detectives announced they are basing a full time team at a Scots beauty spot where they believe her body has been dumped.

Police revealed they have now had more than 80 calls about possible sightings of a silver-coloured car in the Argyll area which they say is key to finding out what happened to the 38-year-old who vanished on May 4.

This morning her parents Robert and Sylvia, both 67, said they were too distraught to even contemplate talking about their feelings, exactly three weeks since she last texted them on her way to work.

Lothian and Borders Police have secured permission to base a team of four officers at Lochgilphead Police Station in Strathclyde to help them map out a search area based on information supplied by the public.

Police have already seized a car they believe was involved.

They now desperately need to know where that is and are appealing for anyone who saw it being driven in the area on Wednesday May 5 between 1.30pm and 3.30pm and then in the evening from 7pm to 9pm.

Specifically, they are keen to hear of any sightings in and around the small roads from Callander, Tyndrum, the Arygll Forest, and Lochgilphead to Inverary.

Detective Chief Inspector Gary Flannigan, who is leading the murder investigation, said: “We have not begun detailed searches in the area yet.

“But any searching will be coordinated around all the information available, which is heavily supplemented by sightings from the public.

“Due to the scale of the area we are interested in, and the nature of the terrain, we have to take a very methodical and rational approach to any searches that may have to be carried out.”

Police may now also call in local guides and specialist equipment in their hunt for Suzanne.

Strathclyde, Scotland’s largest police force, also has a permanent air support unit available by way of a helicopter based in Glasgow if asked.

A source said: “Nothing is being ruled out.”

DCI Flanningan added: “We have had a hugely positive response from the public to all the appeals so far, and for that I am very grateful.

“I don’t need specific details about the car.”

“I’m not asking people to supply details of a make or model, or even a registration plate.”

“I just need to know if people saw a silver-coloured family saloon in the area, around the specified times.”

“Wednesday 5th May is the day after the last Old Firm game and the day before the General Election.

“I’m asking people in these areas to think back to what they were doing that Wednesday, and try to remember if they saw a silver-coloured car on a quiet stretch of country road.”

Suzanne went missing just a few steps from her work with Infrastructure Managers in Thistle Street, Edinburgh, on May 4, just a few minutes before she was scheduled to start work.

The police probe unearthed an affair she had been having with her colleague David Gilroy, 47, allegedly after he returned to his wife Andrea in January having lived with Suzanne at her Whitson home for a time.

He denies any involvement in her killing or disappearance, but has been questioned by police and had his property searched.

A neighbour, who asked not to be named, told how the Gilroy’s once had a silver coloured car.

“But we’ve not seen his car for a good few weeks.

“He was driving his mum’s car for a bit but she’s got a Skoda now.

“We didn’t think anything of it when the cars disappeared – they’re always getting into accidents and scrapes.

“It’s a bit of a running joke on the street that they’re always swapping cars.”

She said that when police first came to question Gilroy about Suzanne’s disappearance he told neighbours somebody had tried to break in – before thieves raided the family home on Monday.

She added: “The police came on the Wednesday – the day after she went missing.

“They were sat in the front room talking to David and Andrea.

“They must have been there for about an hour and when they left I went over to make sure everything was okay.

“David answered the door and said it was nothing to worry about, they had had an attempted break in.

“Again I didn’t think anything about it – we get a lot of attempted and successful break-ins around here.”

Today Mr Gilroy, dressed in jeans and a pale Billabong t-shirt, refused to speak to reporters who approached him for comment over claims he and Suzanne went to Argyll on holiday and that he had a property in the area.

Instead he busied himself hanging out washing in the back garden and left the property in Edinburgh’s Silverknowes only briefly with his wife in their blue coloured car before spending the rest of the day inside.

Although he has not been at work for some length of time now, a spokesman for his company confirmed he did still work for them. They were unable to say whether or not he had been suspended or was on leave.

On Monday Mr Gilroy was forced to call in police after an alleged early morning break in at the family property in which he said a mobile phone and laptop were among the items stolen.

• Anyone with information about Suzanne’s disappearance was asked to contact Lothian and Borders Police on 0131 311 3131.