Young golfer soldiers through illness to land a hole-in-one 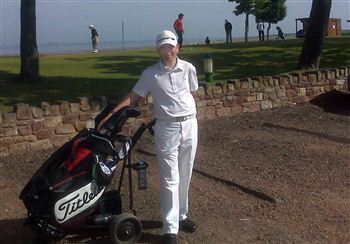 A YOUNG golfer shrugged off a crippling illness to sink a hole-in-one at a recent three day tournament.

Lewis Reid, 12, had been battling vomiting fits and had to attend the Glasgow Sick Kids Hospital in the days leading up to the tournament.

But the youngster, from Milngavie, Glasgow, wowed the crowds when he sunk a ball direct from the 10th hole at the Craigielaw course in East Lothian.

Lewis smashed in the shot from 133 yards using a utility club, to his surprise, on the par three hole during a junior golf club championship.

Delighted Lewis said: “I was absolutely thrilled to have managed a hole in one; I had gotten one before once when I was practicing but never at an organised event.

“It really made my week after feeling so unwell, and I will never forget it.

“I had such a brilliant time and I’m looking forward to what’s next.”

Lewis’s dad Gordon Reid, who was his caddy throughout the competition, said he and his wife Denise were overjoyed with their son’s performance.

He said: “We are so proud of Lewis’s fantastic achievement.

“He played some excellent golf over the three days and considering that he has not been well, it makes his achievement all the more special.

“He is just a wee battler; I can’t imagine an adult continuing to play when they felt that ill.

“Sometimes he would be throwing up at the side of the course, and eventually stopped eating before games to prevent it.”

Lewis’s illness was caused by a swollen oesophagus, which he has been dealing with since January, and came as a result of a previous viral infection in his throat.

The problem will go away in time, but Lewis has been taking medication every day to prevent the vomiting.

More than 500 players aged six to 18 came from 30 different nations to compete at the US Kids Golf European Championship, which took place across some of Scotland’s historic courses.

The event is now in its third year and was organised by US Kids Golf Foundation, set up in 2001 to promote the sport to young people and their families.

Lewis finished sixth in the tournament and immediately went on to another competition at the Glen Golf Club, where he took home the cup.

Gordon said: “Lewis’s dedication to golf has no end, he just loves the sport.

“He is now the youngest junior to be competing for the cup at Milngavie Golf Club in our hometown.”

Two other young players also managed to score holes in ones at the tournament: Lucy Walton from Worcestershire and Kristjan Vojteh Berkelca from Slovakia.

Stolen golf clubs not covered by many insurance policies