A PENSIONER has been rushed to hospital after being found on rocks in the middle of a river this morning.

The 80-year-old was found near a bridge over the River Almond in Mid Calder.

Police still don’t know how the woman got on to the rocks, and Lothian and Borders Fire and Rescue Service had to be called to rescue her from the middle of the river.

She was taken to St John’s Hospital in Livingston by ambulance after the incident just after 8am today.

A spokeswoman from Lothian and Borders Fire and Rescue Service said: “The whole thing is a mystery.

“We don’t know how she got there or if she fell from the bridge.” 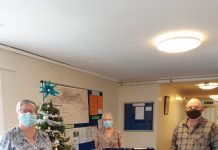