Handful of arrests as activists pitch up at RBS headquarters 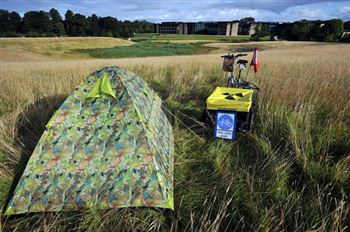 They also launched other climate change protests in the city centre as police made a small number of arrests.

Around 150 activists – going under the name Climate Group – pitched 30 tents and a small marquee inside the grounds of the RBS campus shortly before bank staff reported for duty at 9am.

Police and security guards in high visibility vests immediately set up a cordon round the sprawling Gogarburn site near Edinburgh Airport, and positioned officers on the RBS bridge overhanging the main A8 road nearby.

The protest is over financial support for fossil fuel investments.

Speaking outside the bank’s HQ yesterday Kevin Smith from Climate Camp said: “We want the public, the bank’s account holders and their employees to know that RBS is a major investor in harmful fossil fuel industries.

“Their investment in tar sand oil extraction in Canada has left landscapes and communities ravaged.”

Among those involved are people from an indigenous Canadian community who say they have been displaced by the tar sands project and are expect to give a talk at the camp today.

Richard Bernard, a protester with Climate Camp, said: “We set up camp here to shine light on the fact that coal extraction in the UK and the tar sands in Canada are all only made possible because of banks like RBS financing them.

“We need to stop these obstructive projects by taking on the institutions that seed them, and a really major institution is RBS – even though it is majority owned by the public and government, it is the biggest financer of fossil fuel in the UK.”

“It is a huge area of what was once wilderness, the size of England, and now it looks like the surface of the moon – it is visible from space.

“It is a really dirty kind of oil which is being dug up and it has had huge amounts of polluting effects so that now the indigenous people there have a very high rate of cancer.”

Arriving from all over the UK, protesters answered a last minute call to get to the site a day early in order to wrong-foot the authorities.

Perched on top of a hill looking down on the RBS building, the camp looks like the start of a miniature music festival with kitchens and toilets to accommodate the large numbers expected.

One of the campaigners, tree surgeon Dan Britton, 38, said he was disgusted at the bank’s involvement in energy.

Pointing to the RBS building, he said: “It disgusts me that there are people in those offices who are perpetuating inequalities between the first and the third world.

“Oil is amazing stuff, it’s a fantastic resource, but we shouldn’t squander it like we do.”

But one of the key organisers – Dan Glass, who once superglued himself to Gordon Brown – later admitted the protest was “basically pointless” unless workers from within RBS got involved.

However he warmed a “day of action” is planned for Monday, which activists say will involve 1,000 people blockading the entrance to the Gogarburn complex, and hopes RBS staff will join in on Monday’s planned day of action.

Speaking at a small gathering of campaigners in Edinburgh’s St Andrew’s Square, he admitted that without worker involvement the protest could be ineffectual.

He said: “Monday is about stopping business and putting a spanner in the works a bit.

“The workers within RBS are the ones with the power to make a change.

“What we’re doing is rendered basically pointless unless there is real action like that although obviously it’s important the message is being spread.

“Our issue isn’t with the frontline office staff, some of whom we understand sympathise with what we are saying.

“Our main issue is with the CEOs for putting those people’s jobs at risk by funding climate change, which is not a wise business to invest with.”

A spokesperson from RBS said: “As a major international bank we provide support for businesses working across many industries and reflect the makeup of society and the economy.

“Just as society as a whole has to make a transition to renewable energy sources so will banks like RBS.

“In fact in recent years RBS has been one of the most active banks in the world in providing funding for renewable energy projects so we are at the forefront of helping finance the transition.

“Therefore, while we understand the protestors’ intent and publicity tactics we clearly cannot agree with their decision to target RBS.

“We have offered to meet with the leaders of the protest, and although they have not accepted, this offer still stands.

“Our top priority is securing the safety of our staff and customers and we urge the protestors to make their point peacefully.”

Lothian and Borders Police spokesperson said two arrests had been made so far.

They said: “Lothian and Borders Police have a duty to facilitate peaceful protest and allow for freedom of assembly.”

Officers were dotted around the site on access roads to the camp and patrolling surrounding roads in unmarked people carriers.

Scots property with “priceless” street name on market for £50,000