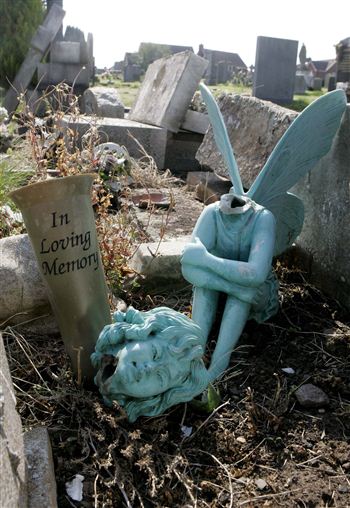 AN HISTORIC cemetery which holds the grave of Scotland’s top Catholic’s mother has been trashed by vandals.

Mount Vernon Cemetery in Edinburgh was established in 1895 becoming one of the most noted in the city, having to stop accepting new graves since 2001 such was its popularity.

Scotland’s most senior Catholic Cardinal Keith O’Brien, who will greet the Pope later this month when he touches down in the capital, laid his mother Alice to rest there when she died during the 1950s.

Now, vandals have ruined 23 headstones and are thought to have caused extensive damage totaling thousands of pounds.

It was not thought her plot was among them.

The stones were toppled at the Roman Catholic cemetery which covers some 5.23 acres in the Liberton area at around 11pm on Wednesday.

Lothian and Borders Police are appealing for witnesses who may have been in the area that night, and say in particular they would like to trace a group of males seen around the cemetery.

The incident was reported to police the following morning after cemetery workers noticed the damage.

One of the workers said a resident living in a nearby house backing on to the cemetery found two young men – possibly in their 20s – lingering in his back garden the same evening, and contacted the police. 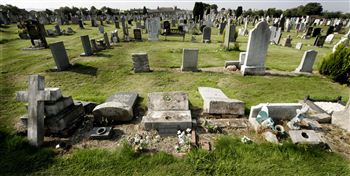 But since no crime had been reported at the time, police said they had no knowledge of the damaged headstones and let the men go.

A police spokesperson said: “This is a shocking act of disrespect, and will no doubt cause distress to a number of families, and the total cost of the damage caused could reach thousands of pounds.

“These headstones are big and heavy, and would have taken some degree of force to shift, so it could not have been done quickly or very quietly.

“We are appealing for anyone who may have been in the area last night, and who saw something suspicious, to get in touch with police.”