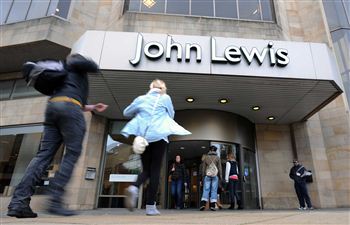 HIGH street retailer John Lewis faces a massive fine after it was revealed they failed to do proper safety checks while refurbishing premises in Edinburgh which led to 15 construction workers potentially being exposed to asbestos.

Edinburgh Sheriff Court heard today (Mon) that some of the men were told to carry on touching danger areas with their own hands even after the alarm had been raised because no proper tests were done.

If asbestos is disturbed it can release harmful fibres into the air, which may lead to diseases such as cancer, lung scarring and serious respiratory problems.

The effects of the illness may not become apparent until up to 40 years later.

Today John Lewis, along with contractors Morris and Spottiswood both pleaded guilty to breaches of health and safety under the Control of Asbestos Regulations 2006, the Construction (Design and Management) Regulations and the Management of Health and Safety at Work Regulations 1999.

Between 21 and 24 July 2008, the department store at the St James Centre in Edinburgh called in the contractors to carry out a refurbishment on management suites in the top floor of the building.

The Court heard that neither of the two companies carried out the necessary checks for asbestos before they allowed the workmen to begin.

Procurator Fiscal Maureen McGovern told how there are three types of checks for asbestos, the first two being suitable only for “day-to-day checks on households”.

But “type three”, described as “getting into every nook and cranny to ensure there is no risk of asbestos exposure”, is the one John Lewis and Morris and Spottiswood should have used.

Instead, they used type two, which resulted in a board with asbestos material going undetected, while unsuspecting workmen started taking down partition walls, and brushing away dust materials with their hands.

On discovering the suspect board, a joiner alerted his superiors and the work was halted.

However, the court heard that the work was allowed to recommence after the contracters failed to identify the correct board and take it away for testing.

Robert Fife, representing  John Lewis, said: “My client is in no way denying that they made mistakes.

“They did carry out a type two check on the area before beginning so it is not as though they neglected to do any sort of safety check – they just got it wrong.

“But I think the important thing to note is that no one got hurt.”

Ms McGovern said the safety checks could have been carried out by either company, and both should have ensured that it had been done.

She said: “The potential risk of what could have happened is very great, and both companies did not make the suitable safety checks, nor did they ensure that the other one had.”

Mr Fife said Morris and Spottiswood had marketed themselves as competent contractors, and that his client would have expected that they would know how to arrange a proper check.

Barry Mathieson, managing director of John Lewis’s Edinburgh and Aberdeen branches, was present at court, as were two representatives of Morris and Spottiswood.

“It was not a deliberate mistake, no one suspected anything.

“It would have been difficult for a company to have done any more under the circumstances.”

Sheriff Jarvie said the mistake had not been “cavalier”, but added that she needed time to look over all of the details and deferred sentencing until 9 November.

Robert Aldridge, Environment Leader, said: “This case clearly highlights the dangers of exposing workers to asbestos and council officers worked hard on a long and intensive investigation to bring this to court.

“Our expectation as an enforcing authority is that large organisations should be leading the way on these important issues and not be failing to meet basic minimum requirements.

“Our officers will not hesitate to report businesses that expose workers or members of the public to serious health risks with a view to prosecution.”

There is no known cure for asbestos related diseases. Around 4,000 people die from them every year in the UK.

If the case had been heard as a summary case, it would have seen any maximum possible fine being capped at £20,000.

However both John Lewis and Morris and Spottiswood appeared on indictment which can be an unlimited amount, depending on whatever amount Sheriff Jarvie decides is appropriate.

Barry Matheson, managing director, John Lewis Edinburgh, said: “John Lewis takes the health and safety of our Partners (staff) and customers very seriously, and has developed extensive procedures to ensure our network of shops across the UK are safe places to work and shop.

“During office refurbishments in 2008 however, there was an isolated incident when the protocol for asbestos testing was not properly followed in our Edinburgh shop.  The incident occurred in an area that is not accessible to the public and our customers were not at risk at any time.

“Since the incident, we have implemented comprehensive new training for Partners backed-up by refresher courses, clearer communication and senior management involvement, ensuring we always enforce strict procedure with all health and safety matters.”

A Morris and Spottiswood spokesperson said: “We acknowledge our responsibility for failing to ensure with the client the necessary risk assessments were adequate prior to starting the works.

“This was an error of judgment rather than a disregard for the stringent safety protocols we have in place for dealing with asbestos.

“This was mitigated by the fact that our employees have received extensive asbestos training and took correct and immediate actions to avert any possible further danger.

“In light of this situation, we immediately took steps to  review our smalls works plan and risk assessments and have introduced additional robust measures to ensure this cannot be allowed to happen again.