FURIOUS protesters stormed an Edinburgh tourist attraction and pelted the Scottish Parliament with snowballs at an anti-cuts demonstration today (Tue). 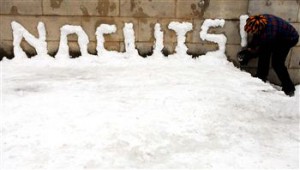 More than 100 activists gathered in Bristo Square outside Edinburgh University’s student union building to demonstrate their objection to the proposed education cuts.

There were particular efforts made by protesters to target the Deputy Prime Minister with banners that read: “Nick Clegg we know you’re fucking Tory too”.

The protest was bolstered by the arrival of scores of students from Glasgow, who had shared a train with leader of the Scottish Conservatives, Annabel Goldie.

A Glasgow supporter announced to the crowd: “Lets just say she didn’t look particularly happy when she came off the train.”

She held up a banner which said: “These men have Eton our Education”.

She said: “I just think that these cuts are going to be devastating for current students and future students and this protest is the best way to show that.

“We want them to know that we are here and that we do not agree with what they are doing.

“I think that there could be cuts in other areas.

“Education is so important for society in general and it should not just be for the elite – it should be for anybody, based on ability not finance.” 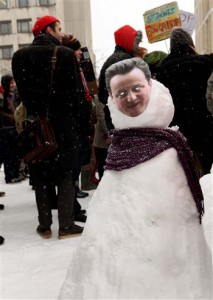 Also present were students who had been occupying a university building since last Thursday following a series of high-profile protests on Wednesday.

The protesters were under the impression that the Deputy Prime Minister was in Edinburgh on the day, which turned out not to be true.

Amongst those rallying the crowd was Robert Fitzgibbon, who chanted over a megaphone.

He said: “This is part of a national day of action to show that we are against what we view as crippling education cuts.

“News that Nick Clegg might be in town today does make the march more significant.”

Angus Brown, 48, was selling copies of the Socialist Worker and he stressed that he believed it to be important to support the actions of students in the bigger fight against the far reaching Government cuts.

He said: “I’ve been thrown off incapacity benefit which I was receiving for mental health issues.

“On the new system I am getting about £40 a week less.

“It means I am struggling to pay my bills and I have to borrow money from my mother and brother-in-law who don’t have much money themselves.

“I support any fight against the cuts.”

When the protest reached the Holyrood building, protesters tied banners to the wooden poles outside, which said: “Education For All”.

A cry then came from the megaphone “jump against the cuts” and the crowd quickly conformed and leapt up and down.

He said: “This is a show of justified anger to what the UK Government is doing to higher education, further education, to our entire society.

“Last week we said that Scotland does have the opportunity to go a different way.

“We have the opportunity not just to win the case that education is something that supports the common good but should be paid for collectively through taxation.”

But soon after one activist egged the protesters on to have a snowball fight and members of the group took aim at each other and then the Parliament building where a number of windows were hit.

The attack lasted 15 minutes before word spread through the crowd that Nick Clegg was next door at Dynamic Earth.

At the grounds of this major Edinburgh tourist attraction the snowball fight recommenced between a few protesters, others took up residence on the central mound and the remaining 50 or so stood outside front doors.

A spokesperson for the Scottish Liberal Democrats confirmed that Nick Clegg was not in Edinburgh today (Tue).