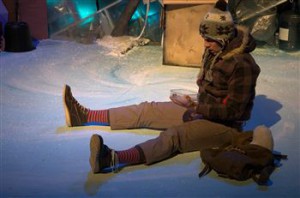 IN THE finest traditions of the theatre – the SNOW must go on.

At least for one Christmas play that has managed to beat the atrocious weather conditions to lift the curtain for its opening day.

The cast of Mr Snow at the Macrobert Centre in Stirling managed to go ahead.

That’s despite a performance of the main production – Snow White – being cancelled on the same day.

The theatre holds 110 people and for the first performance 90 people came through the doors.

And the snowy scene outside made the performance more apt as Mr Snow and his son, Bless You, researched different types of snow within the theatre walls.

Steven Rae, who plays Bless You in the production, said that it’s great so many people turned out despite the weather.

He added: “Snow White was cancelled because a lot of schools were supposed to be going.

“But we had a great turnout despite the fact that it has been snowing.

“We have been rehearsing for the past three weeks and it was nice to see it all come together.”

But everything hasn’t gone completely without a hitch as all cast and crew have been travelling from Glasgow to do the performances each day.

On Monday night it took the cast nearly five hours to get home after a final run through.

Mr Rae added: “The snow has definitely helped us get into character.” 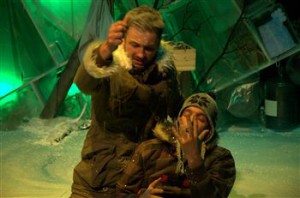 The show tells the story of Mr Snow, played by Kieran Fay, who is a qualified snowologist.

The show is aimed at three to five-year-olds but Mr Rae said that all of the family have been enjoying it.

He added: “It’s a very Christmas show, there is interaction in it too. It’s quite suitable for this time of year. “

Rob Evans, director and writer, came up with the idea after talking to a five-year-old.

He said: “We came up with the idea of jiggly snow and how that might be and what kind of sounds it might make.

“The show has been really enjoyable and is well suited to the age we are aiming at.”

Mr Snow started on Tuesday and will run to the end of December.

Tickets are priced £7-£8 and are available at www.macrobert.org