Amazon to create 950 jobs in Scotland

ONLINE retailer Amazon is to create 950 jobs across two locations in Scotland.

The company will open a fulfilment centre in Dunfermline – bringing 750 full-time posts to Fife – and an additional 200 jobs will be created at its existing centre in Gourock, which packs ship items for Amazon customers.

The online company is also expected to create a further 1,500 temporary jobs at peak periods, such as Christmas.

Making the announcement at the Scottish Parliament today (Thur), First Minister Alex Salmond said: “Amazon has established itself as one of the world’s leading online retailers and I am delighted with its decision to expand its Scottish operations and to create 950 jobs.

“The Scottish Government, Scottish Development International and Scottish Enterprise is doing all it can to attract new jobs and investment to Scotland. 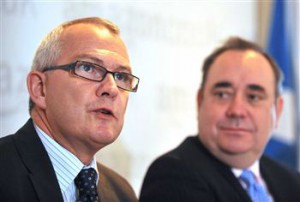 “Amazon’s plan to create a purpose built fulfilment Centre in Dunfermline will create over 750 jobs and deliver a very significant boost to the local economy.

e Amazon’s plans to build on their success in Gourock and to create 200 new posts.

“The company’s announcement of new investment in Scotland is a strong reflection on the success of its current operations and the skills of the local workforce.

me boost to the economy and a demonstration of Amazon’s commitment to doing business in Scotland.”

Amazon was established in 199

8 and sells a variety of products over the internet, including books, films, music and video games.

European Operations at Amazon, said: “Amazon is delighted that its biggest UK fulfilment centre is to be built in Dunfermline.

“It is a great location and it has been Amazon’s priority to secure a new site as close to the current Glenrothes fulfilment centre as possible in order to preserve and transfer the entire skilled workforce with all its experience and Amazon knowledge.

“Our decision to base this major expansion in Scotland, against stiff international competition, is due not only to the excellent local workforce but to the impressive professionalism of Scottish Development International.”

Councillor Tony Martin, strategic chair of Fife Council’s Environment Enterprise and Transportation Committee, said: “This is the largest inward investment project in Fife for over a decade and it is fantastic news, not only for the people of Dunfermline and Fife but for the whole of Scotland.

“The facility will be one of the largest industrial developments ever in Scotland and for Fife to be chosen confirms its reputation as a first class business location and easy place to do business.

“We look forward to working with Amazon during the development of the facility to maximise local employment opportunities when it becomes operational in the autumn.”