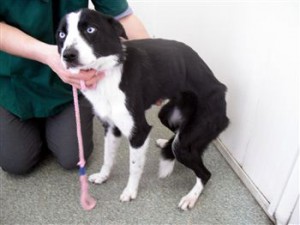 AN abandoned dog has been found weighing almost half what she should.

The female black and white border collie was found in Falkirk on Wednesday 23 March by a member of the public.

The emaciated dog, named Teil by Scottish SPCA staff, is between eight and 18 months old and is small for her age because of malnutrition.

She is being looked after by staff at Edinburgh and Lothians Animal Rescue and Rehoming Centre in Balerno who are keen to find her owner.

Scottish SPCA Inspector Leanne McPake said: “This dog is very underweight. She is only 10kg but she should weigh almost double that.

“She is a young dog, probably between eight and 18 months old, and is quite small for her age which is probably due to malnutrition.

“Her owner obviously didn’t care for her welfare as they have not provided an adequate diet for her and have then abandoned her.

“We are keen to find whoever owned her and we hope someone will recognise her as she has very distinctive blue eyes.

“She is a good natured dog and is very friendly.”

Anyone with information regarding Teil is asked to contact the Scottish SPCA animal helpline on 03000 999 999.

Currie Chieftains calls on public to help it close in on £20,000 roof repair

The Avenue launches at Ravelrig Heights