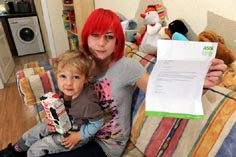 A MOTHER is furious with a leading super-market chain for selling her four-month-old milk, making her toddler violently ill.

Katarzyna Bialek, 28, of Stenhouse Gardens, Edinburgh, told how her two-year-old son Alexander was sick after drinking the semi-skimmed UHT milk.

Her partner Ryszard Nogawka, 28, had bought two cartons of the spoilt milk from Asda’s Chesser store on Monday, September 5.

“I gave it to my two-year-old son and he was sick straight away after he had finished the milk from the bottle,” she said.

“On Tuesday the same thing happened.

“Then my partner opened another carton of milk and he noticed it was not milk inside it, but was part watery and creamy stuff with some crumbs in it.

“That’s when we saw the best before date on the side and the other one was the same. I didn’t take my son to the doctor because he didn’t have a fever, but I phoned my GP.”

Ms Bialek, who works as a bartender, took the rotten milk back to the store to lodge a complaint.

She received a receipt from the manager which said the cartons of milk she purchased had expired in May.

She said: “I got a phone call from the general manager and they said they were going to have an investigation in to how it happened.”

On Wednesday, Miss Bialek, originally from Poland, received a written apology from Asda and a £25 gift card- but she criticised the store for not taking the situation seriously.

She added “I actually think a £25 voucher for something like this is a bit of a joke.

“If Alexander had not been sick straight away, he could have got really bad food poisoning- of if he had been sick when he was sleeping he could have choked in his sleep.

“I phoned them today to say I was not happy.

“My son was at risk and I just want to warn other people to have a look at the best before date. I really think they need to look at how this happened.”

A letter from Asda’s customer services department read: “I am sorry that the items you purchased were out of date and that your son was unwell, I hope that he is now fully recovered.

“We do our utmost to check that all our stock is within date and we are reviewing our process to ensure this does not happen again.”

Another £25 voucher was included in recognition of the “distress” caused to the family.