MINISTERS today announced that the Scottish Government will provide up to £246 million in funding for the modernisation of Glasgow’s subway.

The substantial upgrade to one of the world’s oldest underground metro systems will provide a real economic boon to Scotland’s biggest city, linking to other transport infrastructure improvements across Glasgow and help contribute to the city’s regeneration.

Speaking at Hillhead station where refurbishment work has begun, Cabinet Secretary for Infrastructure and Capital Investment, Alex Neil said: “The Glasgow subway has been at the very heart of the city of Glasgow for 115 years, but the time has come to make this icon of Scottish transport fit for the 21st century. 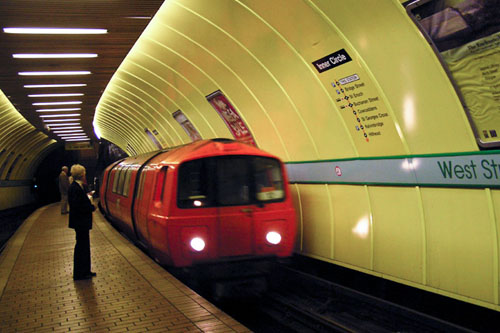 The Glasgow subway is the third oldest in the world  Photo:Finlay McWalter

“That’s why I’m delighted to announce the Scottish Government’s substantial financial contribution of up to £246m of capital funding – money essential to ensuring the delivery of the £287.5m modernisation programme and which completes their funding package.

“This money will enable Strathclyde Partnership for Transport (SPT) to deliver new bespoke trains, to refurbish stations, to upgrade signals and improve accessibility for passengers. It will deliver the service passengers need to go about their business quickly and effectively and boost Glasgow’s economy.

“Work on the comprehensive modernisation programme is now underway and we can already see the tangible evidence of work as it progresses – this funding will allow SPT to see the full programme through to completion to ensure the subway continues to operate for years to come.

“The subway modernisation forms part of our Infrastructure Investment Plan (IIP) which details plans across Scotland for up to £60 billion of spending right up until 2030. The pipeline of investments in the IIP will help improve connections within Glasgow and enhance links between Glasgow and Scotland’s other cities.”

Deputy First Minister Nicola Sturgeon who joined Mr Neil, added: “The Clockwork Orange is a Glasgow institution and this quarter of a billion of support from the Scottish Government will make it fit for the future.

“The success of our cities is central to the wider economic success of Scotland  – so it is vital cities like Glasgow feel all of the benefits that strategic infrastructure investment on key transport links can bring.

“That is why we have delivered the new M74 and M80 motorways which have improved road links through Glasgow and beyond, and why we are improving rail infrastructure in and out of Glasgow from the east and west through major strategic rail improvement projects.

“It is also why we are providing £40m of funding towards the ‘Fastlink’ scheme which when delivered, will provide a quick, efficient link between the SECC, Glasgow’s city centre and the new Southern General Hospital.”

Ms Sturgeon concluded: “We want to see a vibrant Glasgow maximising its economic potential and playing a key role in the sustainable economic development of Scotland. This substantial funding commitment enables the modernisation work for Glasgow’s subway to continue and provides a firm foundation for Glasgow to prosper.”