THE Scottish Seabird Centre, North Berwick, is celebrating the landing of the first puffin in 2012 on the Firth of Forth islands.

The puffin was spotted on the five star Discovery Centre’s interactive live cameras on the island of Craigleith by Mathew, Rachael and James Pearce, who were holidaying in the region from the West Midlands.

This sighting is a significant milestone in the annual wildlife calendar, as the Firth of Forth is of international importance for seabirds. By May, the islands will be home to around 500,000 seabirds including gannets, kittiwakes, guillemots, razorbills, fulmars, shags, terns as well as the famous puffins. 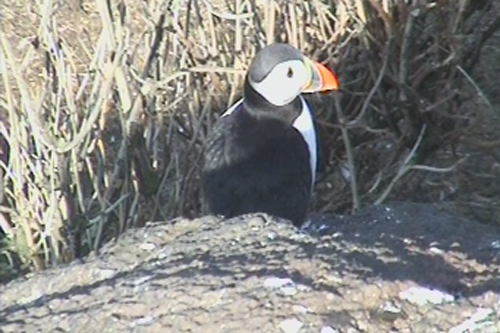 The puffin arrived ahead of an influx of seabirds

Puffin numbers have been in decline in many parts of Scotland over recent years. It is thought that this may be due to a variety of issues including a legacy of overfishing as well as climate change affecting their principal food (sandeels). Locally the invasion of an alien plant called tree mallow has prevented puffins reaching their burrows to nest leading to a dramatic fall in puffin numbers on islands just off North Berwick.

The Scottish Seabird Centre highlights the plight of the puffins through the campaign SOS Puffin, which began in 2007. To-date, 700 volunteers have travelled to the islands of Craigleith and Fidra (which is owned by the RSPB) to help cut down the tree mallow, which can grow up to 9 feet tall. This fantastic volunteer effort is paying off with the biodiversity on the islands increasing and puffins now returning in better numbers to breed. 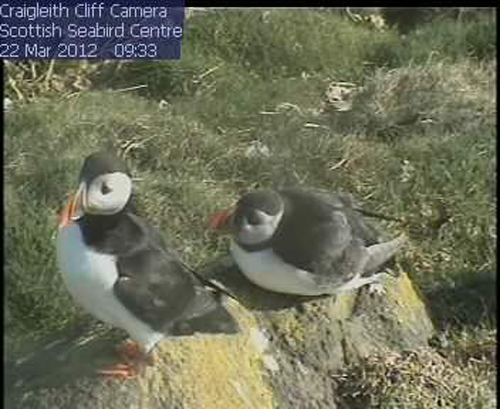 The bird was spotted by a couple on holiday

Tom Brock OBE, Chief Executive of the Scottish Seabird Centre, said: “The return of the puffins marks a very special time at the Centre. It is amazing to zoom in on them using our cameras to see them close up and interacting with each other. Their behaviour is fascinating and they are definitely looking at their colourful best at this time of year.

“The puffins spend winter out on the open sea, returning to the Forth islands in late March and landing en masse in early April. Younger, non-breeding puffins go ‘house-hunting’ while established pairs usually reunite each year, often returning to the same burrow where renovations take place. Then a very special time begins, as breeding pairs take turns to incubate their one and only egg. The arrival of a new chick is marked with the iconic sight of a parent carrying sandeels to their burrow in their colourful beaks.”