A SCOTS primary school says it has improved pupil behaviour by introducing massage sessions during lessons.

Pupils from Currie Primary in Edinburgh have shown improved signs of concentration since learning the massage skills from their school teachers.

About 95 percent of the school’s 350 pupils take part in the massage sessions, each working with a partner and taking turns to massage each other’s back, head, shoulders, neck, arms and hands. 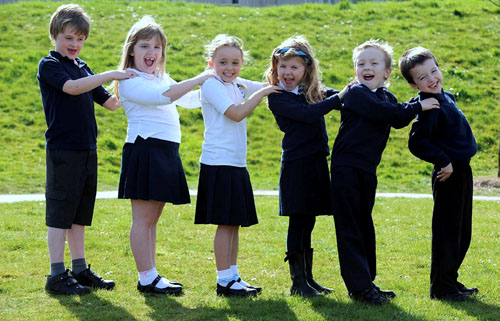 About 95 percent of the school pupils take part in the massage sessions.

Each massage lasts around ten minutes with pupils fully clothed throughout.

The school then paid for all its teachers to learn massage skills before introducing the programme to classrooms in November last year.

Teachers claim that the massaging has helped keep pupils calmer in the classroom.

Mrs Munro said: “Having done baby massage and learning about the benefits, I started to think about the children I had taught over the years that would have benefited from positive touch.

“When the children massage each other, a chemical called oxytocin is released into the environment which is meant to have a calming effect.

“When we first informed the parents, a few choose to opt out of it, but we still allow the kids to be in the classroom so they can benefit from the oxytocin.”

She said that the pupil’s behaviour had improved since the massage scheme began, explaining: “It helps children concentrate better and we have found improvements in a calming classroom environment.

“The children look forward to it and see it as a treat.”

The programme has proven popular with the school’s pupils. Primary two pupil, Rosie Foulner, (7), said: “I like getting a massage because it feels nice, it’s calming and it is also fun.”

Mrs Munro added: “The children are encouraged to choose different partners as they become more familiar with the process. Our older children are now aware of who gives the best massage and are keen to go with them.”

The massage in schools programme was created Mia Elmsater of Sweden and Sylvie Hetu of Montreal, Canada.

The same 15 basic massage moves are taught in schools across the world.