A GROUNDBREAKING project to create a turf roof on Smailholm Tower in the Scottish Borders has won Historic Scotland a shortlist nomination in the UK Roofing Awards 2012.

The iconic 15th century landmark, which lies between Kelso and Melrose, was given a pioneering “living” roof to resolve a long standing water penetration problem, affecting structural timbers and the upper apartments.

Working in partnership with consultant architect Tom Morton, Historic Scotland decided to take an innovative approach to the problem after suspected hairline cracks opened up in the Tower’s cap of whinstone rubble, which had replaced the original and long-vanished stone slab roof. 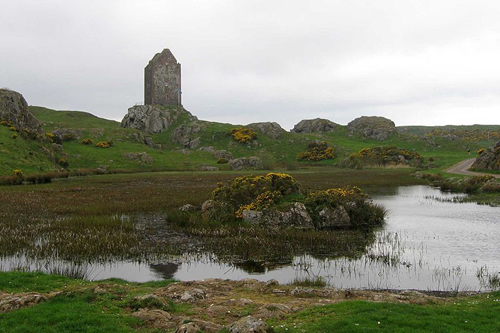 District Architect for Historic Scotland, Peter Ranson, said: “Because restoration of the stone slab roof would have been largely conjectural and involved unacceptable disturbance to the existing fabric, we explored other possibilities for keeping water out.

“In 2006, the agency trialled two different specifications of living roof. One was based on traditional puddled clay below turf, and the other a proprietary clay membrane beneath a sedum mat.

The tests were checked over a period of two years, with visual inspections and electronic monitoring, and we discovered that both roofs had been successful in preventing rainwater penetration.”

Historic Scotland decided to combine the best features of both specifications to achieve long-term durability. The capping was based on the sedum system but modified to enhance drought resistance, and to encourage the growth of a thicker sward to improve overall rainwater retention.

The Tower’s new roof is fully reversible, and replicates evidence of previous vegetation that once grew on the roof, as documented in historic images.

Although there many examples of turf capping on roofs with gentler pitches, the Smailholm roof, with its steeper slope, is believed to have taken this technique to a greater angle than any previous application.

Mr Ranson said: “The living roof has cured the water ingress, benefitting both the Tower and its visitors.”

The success of the project has now been recognised by Smailholm Tower’s shortlisting in the UK-wide Roofing Awards 2012, in the Green Roof category.

Winners will be announced at a ceremony in Birmingham on May 18.