THE number of people on the NHS Organ Donor Register in Scotland has reached a record high of over two million.

New figures show that as of 31 March, 38.8% of the population are signed up to be organ donors.

The year 2011/12 also saw the highest ever number of deceased organ donors, 81, which was an increase of nine on the previous record high from 2010/11, and represents the achievement of the 50% increase on 2007-08 levels set by the NHS Organ Donor Taskforce. 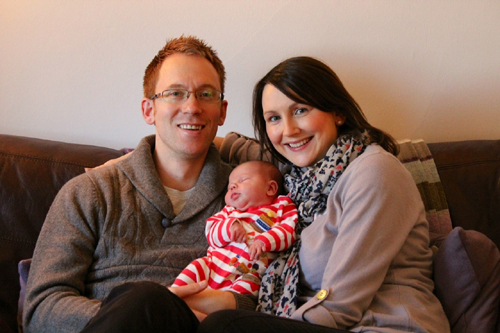 To highlight the importance of organ donation, new dad David Speers, who is waiting on a kidney transplant, is calling for more people to join the Register.

Newlywed David was looking forward to the future with new wife Linda in 2009 when he found out he had chronic kidney failure and would need a transplant to save his life.

David, whose baby daughter Zoe was born in December, has been on the transplant list since June last year and is waiting for the life saving phone call that will allow him to live a normal life again.

Health Secretary Nicola Sturgeon said: “It is a fantastic achievement that we have passed the two million mark. The number of Scots on the NHS Organ Donor Register is higher than ever before, and higher than the UK average.

“These figures also show that we have achieved the target of a 50% increase on the number of diseased donors which the UK Organ Donation Taskforce set in its January 2008 report.

“However, we know that there is still more to be done. The tragic fact is that more than 600 people in Scotland are still waiting for a life-saving transplant and across the UK three people die every day because they don’t get the organ they need in time.

“David’s story is a very real example of how important organ donation is, and how joining the Register could save a life.

“I am very grateful to David for telling his story and for backing our campaign to increase the number of people on the NHS Organ Donor Register.

“Signing up to the register takes a couple of minutes, but could mean the difference between life and death for those waiting for a transplant.”

In recognition of the achievements over the past year, the Health Secretary is writing to all members of staff involved in organ donation and transplantation across Scotland to thank them for their hard work.

A routine medical examination for life insurance ahead of buying a new home in 2009 revealed David was suffering from IgA Nephropathy, an autoimmune disease that affects the kidneys.

David, 34, who works as an oil and gas contracts consultant in Aberdeen, said: “I was at that point in life where I was doing all the adult things you do, getting married, getting a mortgage, life insurance and looking forward to starting a family. It all seemed routine but fortunately the doctor doing my medical picked signs of excessive blood and protein in my urine and referred me to a consultant who, after doing a biopsy, told me I had kidney failure.  I count myself lucky that it was diagnosed when it was, I had no symptoms and was always fit and healthy.”

Doctors closely monitored David and put him on a restricted diet to manage his condition but warned him that he would soon need dialysis and eventually a kidney transplant.

He said: “It was the ultimate shock for us both but I had to keep positive and stay as fit and healthy as I could. I decided to train for and take part in an Olympic distance triathlon in July 2011 but in June 2011 I was told I was being registered on the organ transplant list

“I decided to participate in the triathlon as I had spent nine months training, it was my way of doing something positive before my life changed completely and also achieving a major goal.  I wanted to do it as my way of saying this wasn’t going to beat me and nothing is impossible when you put your mind to it.

“I was also determined to ensure I was fit enough so that when the call does come for a kidney transplant, I’m in good shape to help me through the operation.”

David was not just fighting for his life, his wife Linda had just found out she was pregnant and they were expecting a baby in December 2011.

He said:  “It really gave me something to focus on and fight for. I want to be able to run around after my children and live a normal life without worry so this was my way of showing that kidney disease wasn’t going to get me down.”

David ran the triathlon, completing a 1.5km swim, 40km cycle and a 10km run. Just two weeks later he had a catheter fitted to start his kidney dialysis which he now does four times a day, every day.

He said: “It was a major achievement to finish it and I’m so glad I did. I started my dialysis just two weeks later which means now I can’t run or swim or do much physical activity.

“My whole focus since then has been on my daughter Zoe. When she was born it was amazing, the best moment of our lives, we have so much hope, plans and excitement for the future. Zoe puts it all into perspective; both Zoe and Linda are my inspiration and energy for life, I’m not going to let this beat me.

“My story is not unique or special; I am just a normal guy, with a positive outlook on life, a loving wife and daughter, while also waiting on a life changing transplant.

“There are so many people waiting on transplants and coping with a lot more than me, if from reading this, just one extra person joins the NHS Organ Donor Register then I have achieved something.

“Please, join the Register now, you can text or go online, it’s that easy and you could help save and change lives after you’re gone.”