SCIENTISTS have identified a link between different strains of malaria parasites that cause severe disease, which could help develop vaccines or drugs against life-threatening cases of the infection.

Researchers have identified a key protein that is common to many potentially fatal forms of the condition, and found that antibodies that targeted this protein were effective against these severe malaria strains.

The protein has sticky properties that enable it to bind to red blood cells and form dangerous clumps that can block blood vessels. These clumps, or rosettes, can cause severe illness, including coma and brain damage. 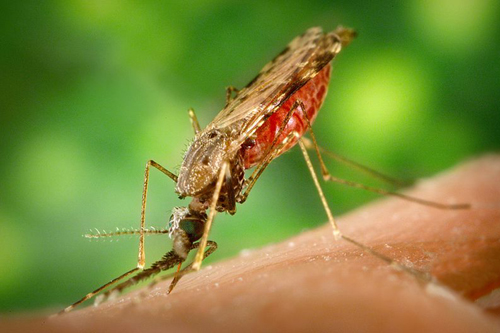 Malaria is spread by biting mosquitos

Presently, between 10 and 20% of people with severe malaria die from it, and the disease – which is spread by blood-sucking mosquitoes – claims about one million lives per year.

Malaria parasites, once in the bloodstream, are able to alter the protein molecules on their surfaces to evade attack by the immune system.

These surface proteins are usually poor targets for treatments or vaccines because they are highly variable between different malaria parasite strains.

Now, researchers have found that the surface proteins of rosette-forming parasites share similarities that may allow them to act as a target for treatments to block progress of the disease.

Scientists from the University of Edinburgh worked with collaborators from Cameroon, Mali, Kenya and The Gambia to test their antibodies against parasites collected from patients. The study, published in PLoS Pathogens, was supported by the Wellcome Trust.

Professor Alexandra Rowe of the University of Edinburgh’s School of Biological Sciences, who led the study, said: “We knew that clusters, or rosettes, of blood cells were found in many cases of severe or life-threatening malaria, so we looked at rosette-forming parasites and found a common factor that we could target with antibodies.

“We hope this discovery will inform new treatments or vaccines to block the formation of rosettes and so prevent many life-threatening cases of malaria.”