A SCOTTISH city’s disastrous tram project could be completed five months early according to council chiefs.

Edinburgh transport convener, Gordon Mackenzie, has said tram works in the capital could be finished by the end of next year, with work currently 22 weeks ahead of schedule.

The official timetable names July 2014 as the final competition date, but the council boss claimed the long-delayed project could now be delivered early. 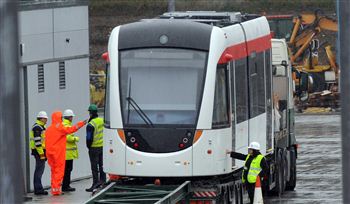 Work on the trams was halted two years ago after a dispute with building firm Bilfinger Berger.

Councillor Mackenzie said an update from the council’s “independent certifier” appointed after last year’s mediation talks, reported the project was within the revised budget of £776m and up to 22 weeks ahead of the latest schedule.

He said: “It shows we are ahead of the programme. We have been as far as five months ahead. There is every possibility that the trams will be running early in 2014 and potentially even before that.”

He said a mild winter, better working relationship with the contractors and more effective execution of the works had allowed the project to progress more quickly.

“If we continue at the current rate of progress there is every prospect of getting further ahead of schedule, which means an early competition is very much on the cards,” he added.

The official note of the meeting says “cost engineering initiatives” has resulted in 22 weeks of time being banked.

But council Labour group leader Andrew Burns said it was “farcical” to claim the trams were ahead of schedule and said he would take the claims with a “huge pinch of salt.”

He said: “I would be first to acknowledge there has been progress, but to try to pretend it is ahead of schedule is to take the people of Edinburgh as idiots.

“The whole project is years overdue and millions of pounds over budget. The people in charge of it should concentrate on finishing what has been started and stop pretending the project is on schedule or, laughably, ahead of schedule.”

Tory group leader, Jeremy Balfour, said: “The project is still almost three years late and well over the budget we first agreed. We will wait with scepticism to see when the tram is delivered.”