A TERRIFIED Susan Boyle was chased up four flights of stairs by an obsessed autograph hunter.

The Scots singing star was left “shaken” after an infatuated fan tried to sneak into her hotel room last week.

Subo was followed up to the fourth floor by the obsessive fan when she was staying at a swanky Liverpool hotel last week. 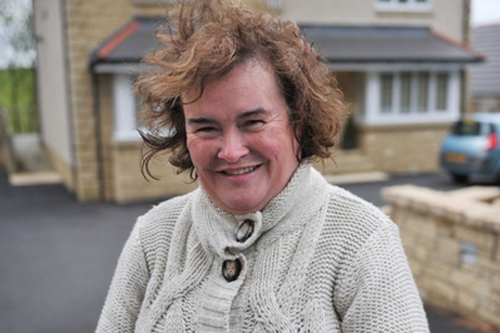 Subo was staying at a £300-a-night hotel suite in Liverpool.

The 51-year-old was staying at the city’s Hope Street Hotel after performing with the cast of her musical I Dreamed a Dream.

Subo had to rush into her £300-a-night suite following the scare. Her security team tried to catch the pest but he fled.

A source said: “Some fans waited for her in the lift but Susan decided to take the stairs.

“Susan’s room was on the fourth floor so it was a fair old walk. He realised she was taking the stairs so started to follow her.

“She managed to get in the room safe but he then made a dash for her door saying he wanted her autograph. It was really scary for Susan – to follow someone up the stairs for four floors is creepy.

“She has been a little on edge, especially at her home recently, so everybody is on high alert.”

Miss Boyle is now being chauffeured to and from the Liverpool Empire Theatre following last week’s incident.

The source added: “She absolutely loves performing but sometimes the reaction of fans is really intense.”

The incident comes two weeks after a frightened SuBo had to call police when her former gardener turned up drunk at her home in Blackburn, West Lothian, demanding money.

Speaking in December last year, Subo, said she had “conquered her demons” after struggling with her sudden rise to fame.

She said: “It’s taken a while to learn how to be happy and enjoy what I’m doing.

“I was so scared it would all come to an end that I stopped looking at the positives.”