A CHARITY shop worker has been hospitalised after a fight in a city store.

A brawl broke out at a Barnardos in Edinburgh shortly after 4pm after a woman was apparently accused of shoplifting.

During the fight a 36-year-old was allegedly assaulted and an ambulance crew was called. 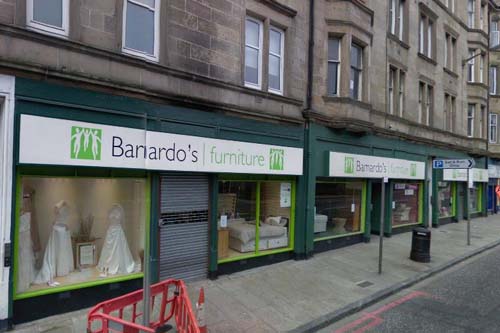 The male member of staff developed chest pain and was taken to Edinburgh Royal Infirmary.

A spokeswoman for Lothian and Borders Police said: “Police can confirm that a female has been detained regarding an alleged assault at a charity store in Gorgie Road, Edinburgh. Enquiries are ongoing into the full circumstances of the incident.
“A man has been taken to hospital as a precaution but not as a result of injuries sustained during the incident.”

Gerard Cousins, Director of Retail and Trading for Barnardo’s said: “The health and safety of our staff and volunteers are of paramount importance to us. The incident is being investigated by the police and we can therefore not comment further at this time.