A FAMISHED Scot has become an internet hit after complaining on a police Facebook page about the force detaining his pizza delivery driver.

Scott McGookin, from Glasgow, was desperate to tuck in to his spicy chicken and jalapeño pizza after getting home from work on Wednesday.

So the electrician was distraught to watch from his flat in Barmulloch as Strathclyde officers bundled the delivery man into the back of their unmarked car. 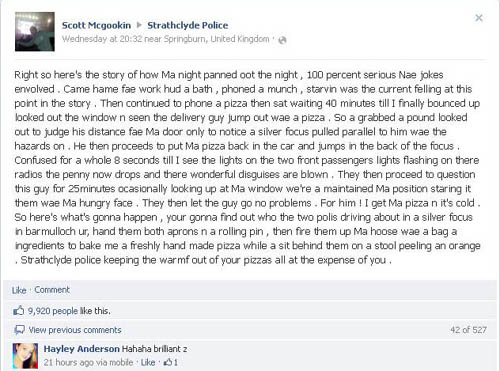 He immediately took advantage of the force’s Facebook page to post a hilarious, 300-word rant, including a demand that officers get out their aprons and rolling pins to bake him a “freshly hand-made pizza”.

The post  received 10,000 ‘likes’ and more than 500 comments before it was apparently taken down.

Scott told police officers that he was already “starving” after waiting 40 minutes for his pizza to be delivered.

He fumed: “I finally bounced up, looked out the window, and seen the delivery guy get out with a pizza.

“Grabbed a pound, looked out to judge his distance from my door only to notice a silver Focus pulled parallel to him with hazards on.”

To Scott’s horror, his pizza man was pulled in to the car and questioned for 25 minutes by Strathclyde Police, while he stared at them with him “hungry face.”

“They then let the guy go no problems, for him,” he wrote, “I get my pizza and it’s cold.”

“So here’s what’s gonna happen,” he told the force. “You’re gonna find the two police driving about in a Silver Focus in Barmulloch, hand them both aprons and a rolling pin, then fire them up to my house with a bag of ingredients to bake me a freshly hand-made pizza while I sit behind them on a stool peeling an orange.”

Scott concluded: “Strathclyde Police – keeping the warm out of your pizzas all at the expense of you.”

His comments provoked a huge reaction on Facebook, with hundreds of comments flooding into the Strathclyde Police site.

Sharon Mitchell wrote: “This post really made me laugh even at 4am when I couldn’t sleep””

Sean McAllister wrote: “Strathclyde’s finest seem to have a gift for pulling over delivery drivers and checking they have business insurance, though you’d think CID would have better things to do with their time.”

But Susan Cameron worried Scott was missing the bigger picture, writing: “Maybe he was planning a murder. Strathclyde Police may have just saved your life but all you can think about is your cold pizza.”

Even Scott was surprised at the reaction. He posted later: “Everybody calm right down, this pizza’s making far too many people emotional let’s just leave it at that.”

A spokeswoman from Strathyclyde Police said: “We are aware of Mr McGookin’s post and the light-hearted nature in which it was intended. We did not remove the post.”