Angry plot holders, some of whom have spent more than 20 years caring for their allotments, were left fuming after a series of out-of-control floods destroyed their prized vegetables and plants.

The council-run allotments, at Carrick Knowe, were left waterlogged after nearby tram works caused damage to local drains. 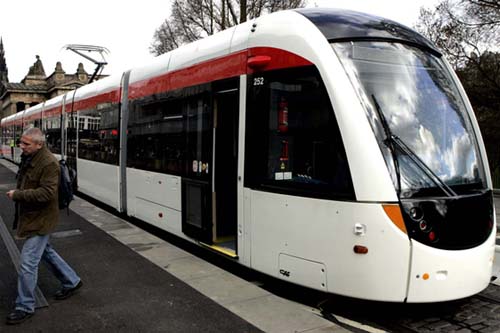 Floods of up to a foot high ravaged the plot holders allotments and William Aitken, 63, treasurer-secretary at the Carrick Knowe allotment, and plot holder for 11 years, said it was a “shocking” situation.

He added: “The guys at the end of the site next to the tram line get it the worst, and are just praying it doesn’t happen again.

“We pay rent to the council for this – £95 a year for plot and the current waiting time is five or six years at least.”

Mr Aitken said prior to the tram works starting in 2009, flooding at the allotment was unheard of.

He said: “The plots were all under a foot of water. Two of the plot holders have been there for 30 years and they have never seen anything like it.

“We had a meeting with the council a couple of weeks ago and one of their people said that even if they find that the drainage has been damaged, it would not necessitate the council having to do any repairs.

He added: “They need to reduce the possibility of this happening again. They need to run another drain somewhere.”

Brian Cockburn, 78, a Carrick Knowe plot holder for 20 years, said: “When the floods were happening it was very frustrating and annoying, and nobody seemed to be interested in looking for a solution.

“I will be keen to see what the solution is, but they should have some replacement drain between us and the tram line.”

Peter Wright, acting chair of the Federation of Edinburgh and District Allotments and Gardens Associations, welcomed the council’s probe, but said it was overdue.

He said: “If the drainage has been damaged then the council and contractors need to have a meeting with the allotment plot holders at Carrick Knowe to come up with a revised solution that reinstates the drains. It’s not difficult to put land drains in.

“We are pleased that the council and contractors are now taking a proactive stance on the flood issue at Carrick Knowe, but disappointed it’s taken so long.”

An Edinburgh council spokesman said: “Following a recent meeting with Carrick Knowe plot holders, officers are investigating the issues raised and will report back as soon as possible.”