RESIDENTS of a Scots town are going hungry  because of “military precision” raids by ravenous seagulls.

Dozens  of  hungry citizens in Kirkcaldy, Fife, have lost their lunches to the ruthless airborne gangsters .

And the problem has got so bad that local businesses have banded together to remove eggs from nesting gulls – or even the nests themselves. 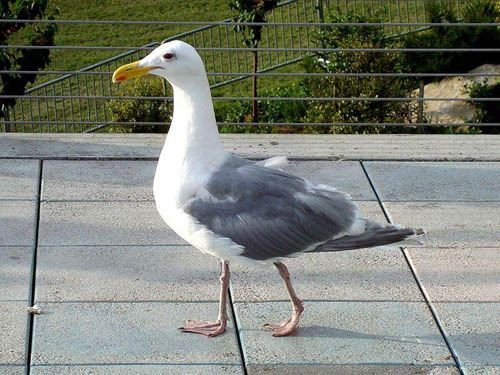 The ruthless winged gangsters have been mugging Fifers of their lunch.

One woman revealed that she had been mugged twice for her lunch in one week.

Local paper editor Allan Crow complained that a seagull swooped on him with “military precision”.

He said: “It swooped out of nowhere and, with military precision, grabbed the tiny exposed crust of my baguette and removed it in one fell swoop.

“I was left holding an empty bag.

“Last Wednesday’s lunch ended up in the middle of the road with four angry seagulls pecking away.

“I was tempted to wade in and retrieve what was left of my Mexican Bandit baguette from Greggs – but I suspect I’d have lost that battle too.”

Leeanne Paul, 26, revealed she had her lunch stolen twice in one week,

She said: “I’ve been attacked twice, both times at the bus station trying to eat something.

“First was a tuna roll and second was a steak bake.

“The first time I was at the bus station, I’d just been to Baynes the baker and got a roll for my breakfast.

“I’d almost finished it when a seagull came from behind and put its feet on my back while it snatched my roll – then used me as a springboard to fly off.”

Adrian Rudge recalled: “I walked out of Greggs when out of the blue I got banged on the top of my head from behind with quite a thud.

“Then my sunglasses were taken off by a wing and my sausage and bean pastie was swiped out my hand. I screamed like a girl because I didn’t know what was going on. The seagull attacked my head. It sounds a bit daft but it frightened me to death.”

Ally Anderson said she was chased by two seagulls, forcing her to take a half detour through the town so she could get to her location unmolested.

She added: “I was also sitting on a bench outside McDonalds when a seagull nabbed a Big Mac out of some boy’s mouth.”

Local business group Kircaldy4all has recruited a pest control firm to fight back against the birds.

Manager Bill Harvey said the three-year programme would start by the end of the month.

“Fifty-five buildings have been identified – subject to the approval of the owners – and our aim is to limit the number of seagull chicks being born.

“The gulls are very smart. Some of these attacks have been very physical with the gulls flying low and stealing food.”

Elaine Devine, Fife Council service manager said: “This can be frightening, especially when there are children are involved.

“Current legislation does allow property owners to take action against nesting gulls, where they are causing problems impacting on public safety and this can include egg and nest removal.”

Council’s across Scotland are battling against seagulls.

It was revealed earlier this year that Edinburgh Council is spending £25,000 to remove seagulls from an upmarket city suburb.

Aberdeen Council decided to trial fluorescent jelly “fire gel,” which tricks seagulls into thinking buildings are on fire, after receiving hundreds of complaints about seagulls every year.

In Kirkcaldy, action against the seagulls cannot come too soon.

Christie Donaldson described her own run in with the flying mobsters.

She said: “My mother was hit in the face by one trying to protect my son’s food.”

Allan Logan added: “A few weeks ago I came out of a shop with my girlfriend and had just bought myself lunch (a chicken mayo roll).

“As I went to take my first bite, a seagull came from behind me and ripped it out of my hand – it was about three inches from my face.”