TRACES of a very early visitor to the Bannockburn area have been discovered during archaeological work in preparation for a new battlefield visitor centre.

Charcoal has been discovered after an exploratory dig and has been dated to the late Neolithic period.

Head of archaeological services at the National Trust for Scotland, Derek Alexander, said that some burnt hazel was found during trial excavations on the present car park. 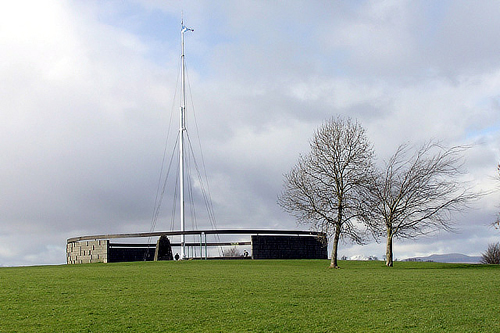 The discovery was made on the Bannockburn site  Photo:Finlay McWalter

He said: “We had hoped that the find might give us a link to a medieval settlement but instead we have evidence of something much older.”

The samples have been carbon dated and are now thought to be from a period between 2900 and 2600 BC.

A larger trench, some 20 by 15 metres, was then dug to see what else might be buried in this area, but no other significant finds were made. Burnt oak, birch and hazel have been brought out of the pit but there is nothing that indicates a major settlement and the area has now been refilled.

Derek added that the archaeological study is not finished on the site.

He said: “We will continue to monitor work, especially when demolition work begins this autumn, and when the car park is stripped of tarmac. Staff will be on hand in case something of significance is revealed.”

The project to create a new state of the art visitor centre is a joint project with Historic Scotland, and will open in 2014, the 700th anniversary of the Battle of Bannockburn. Generously supported by the Scottish Government and the Heritage Lottery Fund, the new facility will provide an unrivalled visitor experience making use of the latest technology to bring visitors face to face with medieval battle, and telling the story of this complex battle as accurately as possible.