TWO young girls were swept off a harbour wall and into the sea by monstrous waves today.

Heroic police and members of public managed to pull the girls – aged 13 and 14 – from the 20ft seas off Eyemouth, Berwickshire.

The older girl was airlifted to hospital after being knocked unconscious and is said to be in a serious condition.

The lifeboat at Eyemouth was launched to deal with the incident

Locals named  the injured girl as Katie McLean, and unconfirmed reports said she and a friend were sitting on the wall watching the huge waves when they were swept away.

A spokeswoman for Lothian and Borders police said: “We were called to Eyemouth at around 13.35, to the harbour.

“It would appear that two teenage girls were pulled off the harbour wall and into the water.

“We had reports of the waves being 20ft in height.

“Our officers entered the water and pulled the girl out of the water.

“She is being airlifted to hospital with serious injuries but she is breathing.” 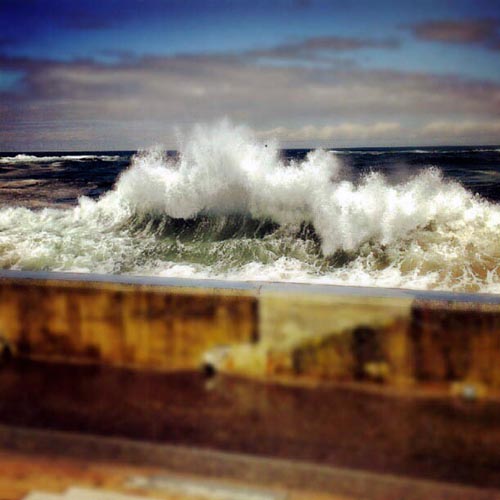 A spokesman for the Coastguard confirmed that Eyemouth lifeboat had been launched to deal with the incident.

He said: “We were called to deal with an incident when two girls were swept off a sea wall at Eyemouth.”

Norman Richardson, Station Officer at Eyemouth Coastguard said the girls were taking part in what’s known as ‘wave dodging’ where youngsters run along the wall and try to avoid being hit by waves.

He said: “We were called out at 15.40 to rescue two girls who had fallen in the sea.

“When we arrived we found that one girl had managed to get out of the water and into safety but the other was face down in the water.

“She had been bashed against the wall and was unconscious and could’ve been face down for up to 20 minutes.

“We pulled her out at which point I gave CPR in order to find a pulse and get her breathing. She was then put in the back of the ambulance while awaiting the airlift.

“She is now said to be in a serious but stable condition.

“Two police officers and three members of the public also jumped in to help.

“We must stress that despite their intentions that was a very dangerous thing to do and no one should do it in the future, nor should youngsters continue wave dodging.

“This is a dangerous cove and should be respected – particularly with the summer season coming up when people take to the water.”

One said: “One of the girls was unconscious as she was getting bashed against the wall. She was the one that got airlifted to Edinburgh Royal Infirmary.”

One holiday maker said: “I was just down watching the waves and then I heard this scream. That’s when you knew things were serious.”

Salesman Stephen Rafferty, who was in the town while the rescue went on, tweeted: “Just watching the local lifeguards, police & ambulance rescue kids from #Eyemouth harbour in very strong high waves.”

Twitter user Billy McGahan said in reply to Mr Rafferty: “I’ve just heard coastguard relay at 16:20 to helimed 5 that the girl still has a pulse, but still working on her.” 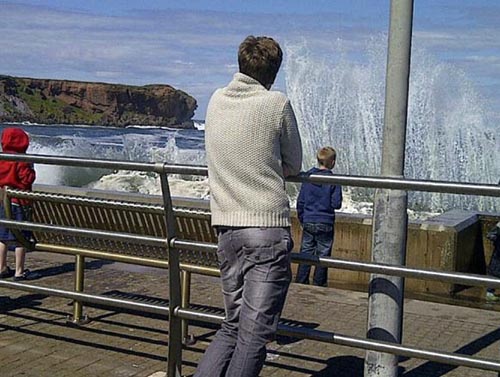 The girls are thought to have been dodging the waves

An earlier tweet from Mr Rafferty, before the incident, showing large waves in front of a seaside wall, said: “Angry waves at #Eyemouth”

A woman who spoke to an eye witness said: “Police were in the sea with ropes around them.

“People were on the harbour who were holding onto the ropes as police were getting battered by the sea.

“They eventually reached her and hauled her out.

“They think she had been sitting on the wall and got swept off by a huge wave.”

The rescue comes just six months after a toddler died after being swept off a sea wall in Fife.

Three-year-old Eryk Cieraszewsk died in November after “strong swell” took him from Kirkcaldy’s esplanade. He later died in the town’s Victoria Hospital.

Witnesses told how his mother was videoing him running through puddles getting his feet wet when the wave hit.