Helicopter rescue after OAP plunges to his death

A DOG walker plunged 20ft to his death from a narrow cliff edge early today in a tragedy witnessed by his wife.

The man, named locally as Robert Gordon Harkess, fell while out walking with his wife, Mabel, and the family spaniel.

Mr Harkess, 69, fell on to rocks at Whitberry Point, near Dunbar, East Lothian, at around 8am.

He was rescued in an three-hour operation involving two helicopters, police, ambulance and coastguards.

Despite being flown to hospital in Edinburgh, doctors were unable to save Mr Harkness, who is understood to have suffered major head injuries.

It is understood Mrs Harkess, who lived with her husband in nearby East Linton, was taken to the same hospital to receive treatment for shock. 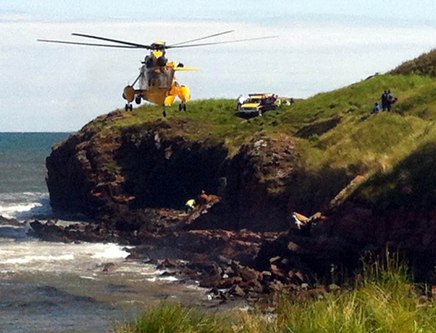 The victim was attended to by emergency services for several hours at the scene  Photo: David Johnston

Rescuers  had faced a battle against the tide as the struggled to remove the pensioner from the rocks. One witness said the waters were “lapping” around the casualty as he was finally winched up to a helicopter.

Pools of blood could still be seen at the spot where the man fell.

One eye-witness to the drama at Tyninghame beach said: “I saw the man lying still. I don’t know if he was paralysed but he certainly wasn’t moving.

“I was there from about 8.30am and I could see medics and police working around him with the incoming tide lapping around him.

“They were at it for about two hours before the Sea King arrived at about 10.30am and took him up with two medics who were treating him.” 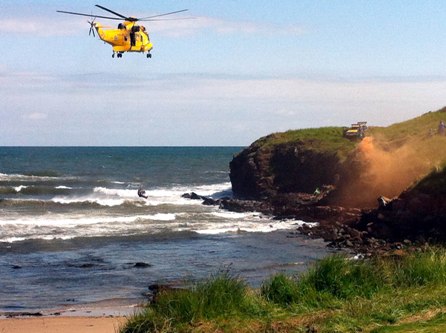 The pensioner was winched to ERI  several hours after suffering the fall  Photo: David Johnston

He said: “The cliffs might only be around 20 feet high, but the path is narrow and winding and right at the edge.

“Add that with the rocks at the bottom and it makes for a very dangerous route.”

A friend of the Harkess family said today: “He was a very quiet, nice man who keeps himself to himself.

“He was a keen member of the local Prestonkirk Manse Church and his wife is a very bubbly and nice person.

“They enjoyed walking their spaniel and he was very fit for his age but he suffered from the early stages of dementia.”

A member of the congregation at Prestonkirk said: “I’m so sorry to hear about this. Gordon was a very faithful church goer and a really nice man who hadn’t been well recently.”

The distraught family returned to their semi-detached home in a pretty residential street in East Linton at around 3pm this afternoon.

They did not wish to make a comment on this morning’s accident.

Despite falling at around 8am, and an air ambulance being on the scene by about 8.30am, questions were asked by locals about why it took until 10.40pm to get the casualty off the beach.

An insider said police at the scene appeared to be frustrated over the time taken to rescue the man.

He said: “Although the air ambulance was there quickly, it could not take away because it does not have a winch. Apparently, the doctor said he could not be carried back up the cliff because it was so slippery.

“Police at the scene were frustrated that it seemed to take so long to get an RAF Sea King there so he could be winched up.

“The guy’s wife was with him when he fell and she was in shock over it.”

Local dog walker Fiona Mains, 70, from East Linton said it didn’t surprise her that someone was injured.

She said: “I walk my dog here three times a week and it doesn’t surprise me to hear about the accident, it’s very windy here and the edge is very slippery. I’m always very careful not to go too near the edge with my dogs.You really need to take care .”

Another Dunbar walker said: “I saw the ambulance drive away at about 11am, when I got to the beach I could see police and about 3 or 4 members of the public. It looked quite dramatic.

“It is a classic, slightly dodgy, coastal route. I wouldn’t go on it now I have a child, it doesn’t seem safe to me. If you have a small child you would avoid it.”

Sqd Ldr Dave Webster, RAF Search and Rescue’s media and communications officer, said: “I can confirm that Rescue 131 left Boulmer at 10.01am and were on the scene at 10.21am.

“At 10.49am they landed at Edinburgh Royal Infirmary with the casualty.”

Lothian and Borders Police said in a statement: “A man has died after falling on rocks at Tyninghame Links near Dunbar in East Lothian this morning.

Police were called around 8.10am after the 69-year-old from East Linton fell around 15-20ft.

An emergency recovery involving the police, ambulance service, coastguard and RAF then took place and the man was airlifted to the Royal Infirmary of Edinburgh where he passed away this afternoon.”