Hundreds of tonnes of shellfish are being flogged by squads of black market pickers along the south west coast of Scotland.

Organised gangs are selling Solway Firth cockles, clams and oysters to hotels, restaurants and fishmongers across the country. 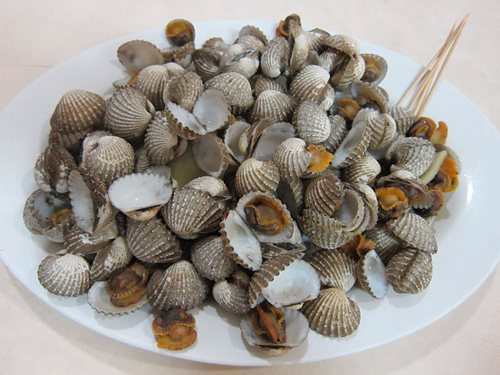 Cockles are big business in Scotland.

Health officials warn that illegally harvested cockles are more likely to be contaminated with E.coli, norovirus or salmonella as they will not have passed rigorous cleaning and filtration processes.

Alex Fergusson, MSP for Galloway and West Dumfries and former presiding officer of the Scottish parliament, said illegal cockling was “a serious issue” in his constituency and has urged ministers to take action.

He said: “A massive amount of illegal activity has taken place along the coast of the Solway this year and local residents are too frightened to intervene.”

Harvesting cockles on the Scottish side of the Solway Firth has been banned since September last year.

However, local residents claim “squads” of about half a dozen people routinely steal cockle beds at night.

The gangs are dropped at the shore in vans and 4×4’s and use spades or small boats fitted with dredging equipment to take the lucrative cockles.

A tonne of cockles can be harvested within three hours and can fetch up to £2,000 on the black market.

Cockles that are sourced from certified beds are graded according to water quality and undergo strict filtration processes to ensure that they are fit for human consumption.

But no such measures are taken by illegally sourced cockles from the Solway Firth which are thought to enter the food chain in Britain via hotels, restaurants and fishmongers. Vast quantities of the shellfish are also transported in lorries to France, Spain and Holland.

“Cockles have the potential to form a sustainable business in Dumfries and Galloway but when they’re being poached out of existence, that isn’t possible. There are strict regulations about the harvesting of cockles and their transport onshore and if these are not followed, it raises serious public health concerns,”

The shellfish industry is an important part of the UK’s food economy and is worth more than £250m.

The Gangmasters Licensing Authority (GLA), which was set up following the Morecambe Bay tragedy in 2004 in which 23 Chinese cockle pickers drowned, recently warned it is stepping up its efforts to combat illegal gangmasters in the shellfish sector.

The move follows the prosecution of two gangmasters found to be operating without appropriate licences.

A senior Scots police officer warned there is evidence that organised crime gangs are diversifying into illegal cockling.

Chief Inspector Irvine Watson, of Dumfries and Galloway police, said: “We have received a number of complaints of suspicious activities, we believe in relation to the illegal harvesting of cockles.

“One individual is facing prosecution. It is organised, people work as a team and because of the monies involved, they can be classed as organised crime groups. Quite apart from the illegal aspect of the activity, it also poses a danger to lives.”

Earlier this year, a Vauxhall Frontera vehicle was discovered in the Solway Firth at Cardoness Bay, near Sandgreen at Gatehouse of Fleet. It is believed that illegal cocklers became trapped as the fast-flowing Solway tide came in.

A spokesman for the Scottish government said illegal cockling was being investigated by a joint team.

He said: “Marine Scotland, the police, the Gangmasters Licensing Authority and others are working together in partnership to investigate illegal cockling. This approach means that those engaged in illegal cockling are very likely to be caught and punished.”

Bright eyed and bushy tailed – Could this be Scotland’s cutest red squirrel?