BUNGLING transport chiefs have forked out least £1million to repair faults on Scotland’s first new rail line since devolution, it has been revealed.

Network Rail have revealed that half of the £2million spent on the Stirling-Alloa-Kincardine route since it opened four years ago has been spent fixing “snagging” faults.

This cost is in addition to a list of work being carried out by contractors to fix defects on the troubled line. 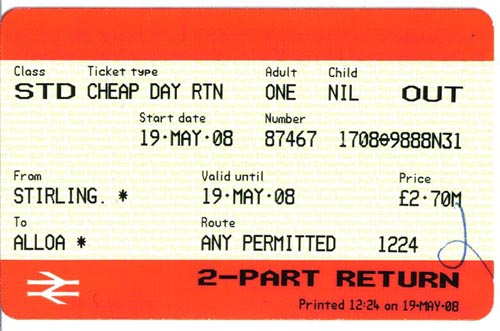 The exact costs of the overall bill has not been confirmed by the government agency, but insiders say £1million is twice as much as the government expected to spend on the brand new line.

Amongst the repairs was placing an extra ballast under the tracks and realigning rails to create a smoother and quieter path for freight trains and passenger trains.

He said: “Transport Scotland has failed to ensure the original line was in a fit state. A lot of additional ballast has been required, but it still has not resolved the noise problem.”

He said: “The noise is at shocking levels. Every time I talk about it my blood pressure goes through the roof.”

The troubled line has been hit with scandal since it was approved by the Scottish Parliament in 2004.

The cost to build the line ballooned from £37million to £85million and was completed two and a half years late.

Problems were blamed on poor management of the project, which was overseen by Clackmannanshire Council and the now-scrapped City of Edinburgh Council transport body TIE, before being taken over by Transport Scotland in 2007.

An industry expert said fault lay with the way the project had been handled rather than the construction firms involved – BAM Nuttall and Babcock Rail.

They said: “It was not about tatty nails or poor workmanship but design issues. The contractors were pulling their hair out about the management of the project. They just built what they were told to build.”

Network Rail, which runs tracks and signals, confirmed it had had to do extra work on the line.

A spokesman said: “Since the line became operational in 2008, we have undertaken snagging work following construction as well as planned and reactive maintenance.

“We have also undertaken some renewals work in relation to the existing operational railway. Since 2008, Network Rail has spent in the region of £500,000 per annum on snagging work and maintenance including track drainage systems, additional ballast, tamping [packing down ballast] and lining [rails] as well as usual day-to-day maintenance.

“Snagging issues are not unusual with a newly constructed line, and given the severe weather experienced since 2008 and the freight and passenger usage of the line, this was broadly what we expected… and therefore what we budgeted for.”

The spokesman said the firm was checking the state of the line so it could budget for “future interventions and maintenance” over its next spending period, from 2014.

A Transport Scotland spokesman said: “It is normal industry practice to undertake snagging and maintenance works to newly constructed railway lines and considering the recent severe winters we would expect some repairs to be undertaken. Network Rail is responsible for operating and maintaining Scotland’s rail infrastructure.

“The return of the rail service to Clackmannanshire has been a positive development for the local and national economy and the environment. In the first year of operation alone, 400,000 passengers took advantage of the new service.”