A STUDENT took revenge on his neighbour by stealing the door handle to his room and hiding the parts in 100 cups of dirty water – which he then made him drink.

A Facebook picture of Kenny Cowie’s ingenious prank clocked up more than 60,000 “likes” in the first day.

The Edinburgh student was getting his own back for a stunt by Chris Stone in which he daubed his room with toothpaste. 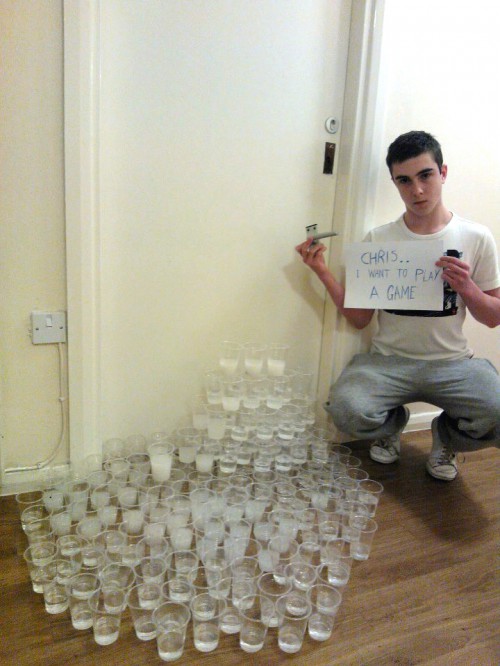 Kenny cleaned up the mess but kept the cloudy water and poured it into 100 plastic cups.

He then locked his pal’s room, took apart the handle, and hid the screws inside the cups, which were arranged outside the door.

Chris, who is studying sport and exercise science, was told he would have to drink his way through all the cups to get the screws back and only if he completed the revolting task would he get the handle back.

After completing the stomach-churning job and getting back into his room, the Edinburgh Napier student posted on Facebook: “I’m dying here.”

After setting up Monday’s prank, Kenny posted a message to Chris’s Facebook “wall”.

It stated: “Dear Chris, I came back from a hard walk down to the Grassmarket to find that you had put cups of water all around my room, and written on my door “revenge kenny” with tooth paste.

“This was a mild inconvenience.

“So upon finding this we at 18/3 started plotting on how to return the favour.”

“As you can see from the following photo I have taken your door handle and the 4 screws to hold it onto the door.

“I have also taken all the cups of water from my room and placed them outside your room, following this I took the water which we used to clean the tooth paste off my door and filled some of the cups with it.

“In several of these cups are hidden the 4 screws. 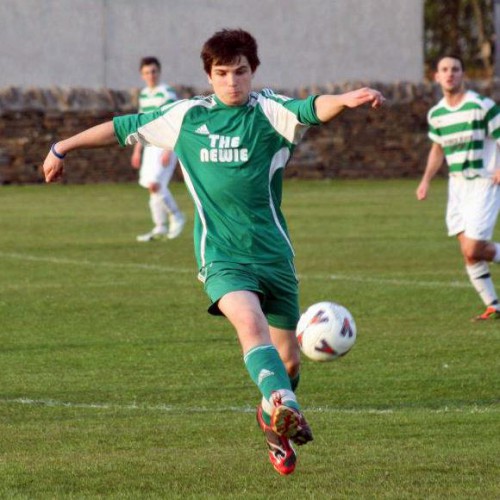 “My game to you is you must drink EVERY cup of water/toothpaste to then find the 4 screws.

“You may be thinking you can just empty them out and find the screws that way rather than drinking them.

“However unless you actually drink them ALL, I will not give you the clue as to where your door handle is hidden.

“The choice is your Chris… Stay locked out. Or drink it all.”

After realising he had a simple choice between drinking the water and homelessness, Chris performed the task.

He later posted on facebook: “I so shouldn’t have drunk all those cups. Wow.”

The picture was posted on the hugely popular link-sharing website Reddit, described as “the front page of the internet”.

Friends and strangers alike left scores of posts expressing their admiration for the prank.

And Ross Haughton added: “Kenny, this may well be the greatest thing you will ever do.”