A DOUGHNUT store which brought traffic chaos to some of Scotland’s busiest roads now wants permission to stay open all night.

The Krispy Kreme drive-through on the western outskirts of Edinburgh disrupted traffic on the city bypass and M8 as customers queued to buy doughnuts.

The store has now put in an application to Edinburgh city council for permission to stay open until 5am – just two hours before it reopens. 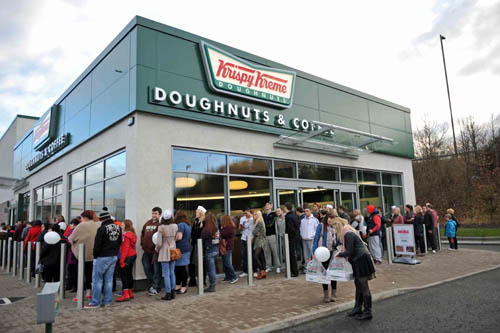 The store’s opening on February 13 proved so popular that police asked a few days later for drivers to avoid the area altogether.

Officers were also on hand to direct traffic as the tailbacks reached the M8.

Hungry diners queued for as long as two hours to get their hands on the sugary snacks, but locals said traffic had died down since the 13 February opening.

Current opening hours and 7am to 10pm Monday to Saturday and 8am to 10pm Sunday.

Betty Milton, chair of Sighthill Community Council, said: “At the moment we’re laid back but keeping an eye on it.

“The first few days were utterly chaotic, horrendous, and I know police were called.”

Ms Milton added: “Things seem to have calmed down, and I do not see Krispy Kreme bothering too many people where they are.

“They are out in the middle of nowhere.

“Knowing how much the kids like it and the taxes Krispy Kreme will be paying, maybe it’s even a good thing.

“But I cannot understand why anyone would want a doughnut at four o’clock in the morning.”

Councillor Nigel Bagshaw warned development on the city outskirts could turn Edinburgh into a “doughnut city.”

He said: “Thirty years ago when some of the out-of-town shopping centres were being planned, there were warnings of Edinburgh becoming a ‘doughnut city’, where development is concentrated on the outskirts, creating real problems with access and extra traffic.”

“We are not there yet, thankfully, but we need to be very wary of gradually creeping towards that point and the example of an out-of-town doughnut attraction adding to the problem is a touch ironic.”

He continued: “I’m not sure that nipping out to Hermiston Gait for a 5am doughnut is a top priority for most folk in the city or that even if you walked there and back you’d burn off even half the calories you’d have taken in.

“In any case, there are plenty of local shops serving the same thing, so why make the effort?”

A council spokesman said: “An application has been received and will be considered in due course.”

A spokeswoman for Krispy Kreme confirmed the application had been lodged but added they currently had no plans to stay open until 5am.

“We often put these in just so we have them,” she said.