THE campaign to return a Scottish King’s sword and dagger has suffered a serious setback after an expert warned the weapons may not be genuine.

James IV died at the Battle of Flodden in September 1513, ending a disastrous attempt by Scotland to invade England.

His sword and dagger were carted off by the victors and have been kept at the College of Arms in London since 1681. 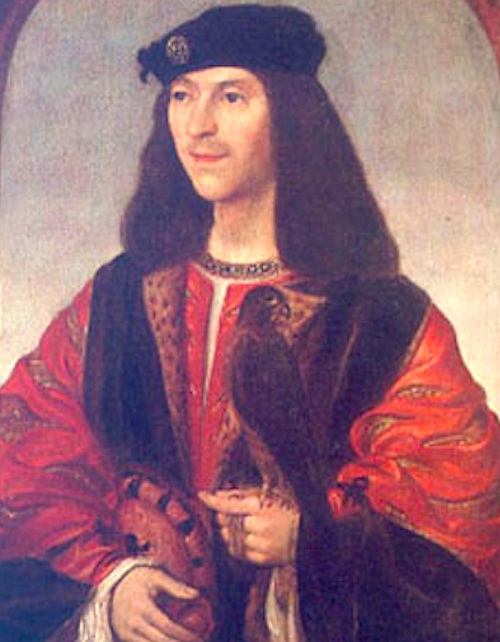 As the 500th anniversary of the battle approaches, campaigners have been calling for the items to be returned north of the border.

But a leading Scottish historian and weapons expert, Dr Ralph Moffat, recently examined the weapons and believes they were made at least half a century after James IV fell.

The Battle of Flodden was the largest ever confrontation between Scotland and England.

James IV invaded northern England with an army of over 30,000 soldiers in order to uphold an alliance with France, with whom English King Henry VIII was at war.

The Scots lost at least 10,000 men at Flodden, Northumberland, including the king himself.

It was said at the time every noble family in Scotland lost a son in the battle.

Last month, Nationalist MSP Christine Grahame tabled a motion in the Scottish Parliament calling for the return of the items, which received broad support from other MSPS.

The Society of William Wallace also called for the return of the weapons, the only known, surviving link to James IV.

Dr Ralph Moffat, Glasgow Museums’ medieval weaponry expert, was called in by the College of Arms to examine the sword and dagger.

His report states that “the sword and dagger can be dated to the late sixteenth century” as the hilts resemble designs from that period.

The report also notes the use of a left-handed dagger to parry blows is itself characteristic of a later period.

Dr Moffat adds in his report: “The sword blade, however, may well be an older example that has been reused and refitted to the hilt.”

The College now admits on its website: “The probability that the sword in its present form and the dagger date from long after Flodden may be seen as disappointing…”

Battlefield archaeologist Tony Pollard, of Glasgow University, conceded that no one would be keen to display the weapons if their authenticity was in question.

He said: “I hold Ralph in high regard and I wouldn’t doubt what he says.

“There’s no point bringing up something that’s not true. Symbols like this are important and if they turn out to be faked people can be left with egg on their chin.”

But the campaigners refuse to be deterred.

Convener Duncan Fenton, Convener of the The Society of William Wallace, claimed: “[The report] is a smokescreen that lets them keep it.

“It’s chronicled that James IV paid for the sword.”

Grahame still insisted they objects should be shown in Scotland.

“We’ve been here before…There are other views that the sword and the ring can be dated back to Flodden,” she said.

“We’re still keen to get it back.”

The College of Arms also has a gold ring said to have belonged to James IV and campaigners hope this could yet prove crucial.

The emerald-set ring was given by the Queen of France to James as a token of their alliance.

Mr Fenton wants the ring re-examined in the hope that should it be proved genuine it will support the case for the weapons having belonged to James IV.

Clive Cheesman, Richmond Herald at the College of Arms, insisted they had yet to receive a formal request to hand over the items.

He said: “Until and unless a specific loan request comes from an institution capable of displaying them there’s little we can do.

“Of course we are open to the idea.”