Residents at Laverockdale Park, one of Edinburgh’s smartest suburbs, have been locked in a three-year battle with Goodwin over a 25ft hedge that shields his £3.5million mansion from surrounding properties.

Neighbours argue the massive wall of vegetation cuts out light and even stops plants growing in their gardens. 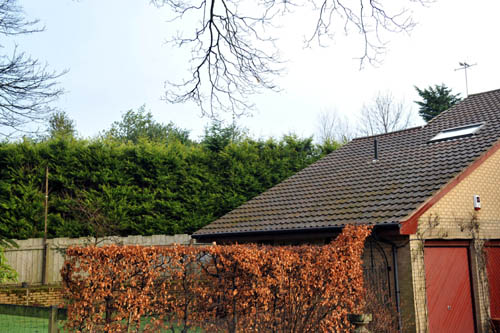 The legislation gives local authorities the power to tackle high hedges more than two metres (6ft 6in) in height if the plants, such as leylandii, form a barrier to light.

Goodwin’s unhappy neighbours say they will now apply to Edinburgh Council for a high hedge notice which could force Goodwin to cut down the hedge surrounding his six-bedroom home.

Goodwin, 54, bought the mansion in June 2011 after his current house, which sits on a main road in The Grange, Edinburgh, was targeted by vandals.

His estranged wife Joyce has been staying at the property since their split and neighbours say despite her recent efforts to chop eight foot off the hedges, they are still unacceptably high.

They say they will now use the legislation to force Goodwin to chop the leylandii that blocks out light and plunges their homes and gardens, at the plush suburb where properties cost around £400,000 into permanent darkness.

Although the Bill gives councils the power to set their own rates, it is expected that they will charge between £325 and £500 for cutting back high hedges. Both parties can appeal a local authority’s ruling to Scottish ministers.

One neighbour, Gavin Hamilton, 49, a marketing manager, said he hoped the bill would force Goodwin to prune his hedge.

He said: “I think it’s a good idea to restrict hedges that grow too far. That hedge in particular is just oppressive and forces the light away from the houses.”

Another resident, who did not wish to be named, said: “Six foot probably isn’t high enough for privacy, but it doesn’t have to be seventeen feet either. I think seven or eight feet would be enough to give privacy, and fair to both sides”.

Rozalia Nicolson, 63, also from Laverockdale Park, said: “I think ten, or twelve foot would be fair.”

Another resident added: “Although it is not directly beside my house, I know that those houses directly affected have been campaigning for a while to get the hedge cut shorter.

“I don’t think it’s fair for people to have hedges that can affect others properties. Hopefully the new rules will mean it can be less of a problem in future for everyone. I think it would be good if both parties could reach a compromise.”

This week, RBS shareholders announced they were launching a lawsuit against Goodwin and other executives, which could be worth £4billion.

They say they were misled over the bank’s £12billion rights issue in April 2008.

The property, where his wife Joyce now stays, has large entry gates and a state-of-the-art security system as well as the tall trees for shade.

Inside the sprawling grounds there is a tennis court, Japanese garden and a circular fountain in the driveway.