MEN are muscling in on a underground sport that has already proved a massive hit with the fairer sex.

Roller derby has been taken up by hundreds of Scottish women who enjoy belting around a track on roller skates while knocking lumps out of the opposition.

Now the men are playing catch-up by forming the first male roller derby league and the opening fixture has been arranged this weekend.

Roller derby originated in the United States and has been enthusiastically adopted by Scottish women, drawn by its feminist, empowering ethos.

Two teams of five skate around the track in the same direction. Each team has a “jammer” who starts at the back and earns a point for each member of the opposite team they overtake.

A mean name is as important as a mean attitude and Edinburgh’s women’s league – Auld Reekie Roller Girls or AARG for short – boasts teams called Leithal weapons and Twisted Thistles.

Not to be outdone, around 50 brave Scotsmen have signed up for roller derby over the past six months and leagues are being formed across the country. 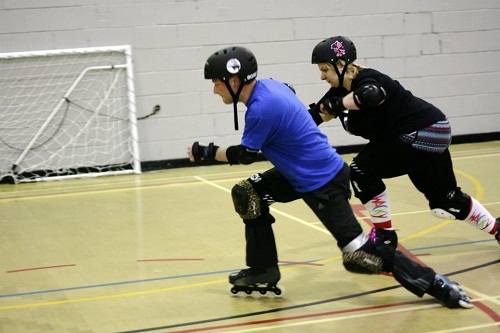 The first league, the Falkirk-based Bairn City Rollers will take on Welsh players in Grangemouth this weekend in the first male bout in Scotland.

One of the team, Project manager John Owens, 43, goes by the name Megablok-er because of his love of Lego – as well as his prowess at blocking other skaters.

The dad-of-three says he was bullied into taking part by his roller derbying wife Alex, alias “Wee Zoomer”, 37, but quickly developed a love for the sport.

He said: “There’s about 50 male skaters in Scotland now, with about 35 ready for bouts.”

He said a small minority of purists think the sport should remain women-only.

“On the whole it’s accepted very well by the female community.

“But in the the same way you might get a reaction to girls playing football, some will say ‘It’s our sport, what are you doing?'”

He said the team are looking forward to their debut against the Welsh side: “There’s a lot of pride lying on it. But in roller derby you knock lumps out of each other then go to the pub together afterwards.”

“But my 12-year-old daughter is a brilliant skater and wants to become a referee.”

John said: “Just because of their physical size guys can lay on a bigger hit than girls.

“But it’s not that simple – some of the girls can hit bloody hard!

“Size isn’t everything, it’s more tactical than that. Our jammer is a wee guy but he’s really fast.”

John said there were a lot of reasons why men wanted to take up the sport.

“There’s a lot of people who remember going to roller discos when they were younger – there’s an element of nostalgia.

“A lot will have their girlfriends of wives playing it.

“It’s also got a slightly underground feel to it.”

Elsewhere in Scotland, a league called Mean City have set up in Glasgow and male players have a league in Dundee.

The first bout against the South Wales Silures is scheduled for Sunday 7 April at Grangemouth Sports Csentre.