BUSINESSES on an Edinburgh street closed for more than a year because of tram works are rejoicing as the street is due to reopen.

Disruption caused by 18 months of tram works in the West end of Edinburgh is to end on Saturday when the affected streets reopen.

The reopening of the Manor Place to Shandwick Place stretch of the road will signal the end of trams works in the City Centre, after six years. 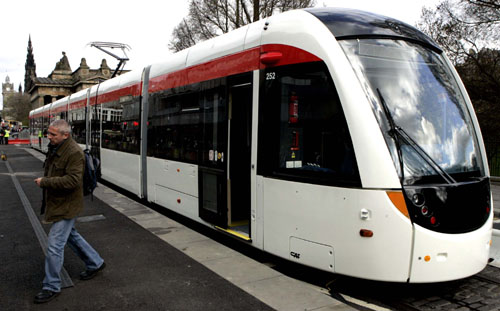 The £776m project has involved much disruption due to the civil engineering works to reroute the underground services  and then lay tram tracks on our city’s streets.

A range of changes to traffic arrangements in the West End will now come into force with changes to public transport and vehicle access.

These include a return to two-way vehicle traffic at Manor Place and bus, taxi and cycle access to Shandwick Place, with general vehicles permitted entry between 8pm – 7am.

Jim Gow, owner of Au Bar on Shandwick Place said: “Its a massive relief to all the traders on Shandwick.

“It’s going to take well over two years to accrue the amount of debt we have worked up over the last five years.

“But were happy to welcome back shoppers and tourists in time for Christmas.

“All of us on Shandwick have suffered but stuck it out and we are ready to keep trading and return to normal.”

“I haven’t noticed any improvement in the number of customers since they reopened the pedestrian paths.

“Yesterday was one of the quietest days I’ve experienced in years.

“It’s been a nightmare, we’ve had customers complain about smell of the tarmac being laid, and of the noise but we’re lucky we’ve got good doors so couldn’t hear that bad.

“I’ll be glad when the street is open again and fingers crossed it will work out.”

Lesley Hinds, City of Edinburgh Council’s transport convener, said: “With the tram project now nearing completion, the city centre is beginning to take shape and we can look forward to next year when passenger services will begin.

“We know it’s been very difficult for people living and working in areas affected by the tram works and it will be a big relief that the majority of disruptive works in the city centre are now over.

“Now is the time to look forward to the opportunities ahead and to embrace the benefits that a modern, integrated transport system, incorporating all transport options, can bring to our city.

“Our target for service launch is now May 2014 but, of course, we’ll bring this forward if we can.”

Transport Minister Keith Brown said: “Alongside the redevelopment of Haymarket and Waverley Stations, Edinburgh will very soon have a modern transport system it can be proud of.

“The investment at Haymarket, Waverley, the Gateway and in electrification, takes us one step closer to revolutionising the rail network in central Scotland.”

“We cannot forget the disruption that those living and working in the west end have had to endure for too many years, but we can welcome this step forward in a tram project which is gathering pace.”

Testing has begun between Gogar depot and Edinburgh Park Station with full route testing scheduled to begin in December.

The council has set out plans to create a new organisation, Transport for Edinburgh, to integrate transport services in the capital.

Transport for Edinburgh will be set up initially to integrate the tram and bus services, with Lothian Buses and Edinburgh Trams confirmed as the operators.

City of Edinburgh Council said it was confident it could meet the revised budget of £776m and the latest target of having the tram line operating before summer 2014.