Older than Stonehenge and the Great Pyramids, it has been called the ‘Scottish Pompeii’ because of its excellent preservation but now it is at serious risk.

The report says the the World Heritage site is at “significant risk from a variety of climate-related factors” and the coastal erosion as “a threat to the long-term survival” of the subterranean village. 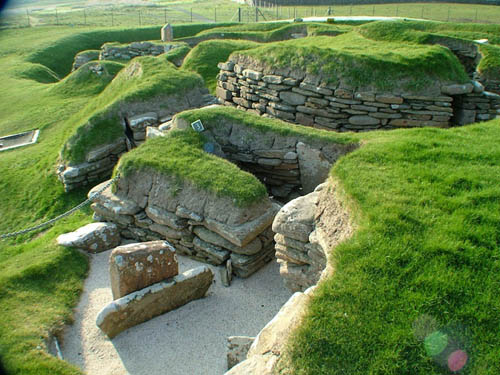 Skara Brae is believed to be 4,000 and 5,000 years old and is the main attraction of Heart of Neolithic Orkney (HONO), which was made a World Heritage site by Unesco in December 1999.

For the past 100 years, the main bulwark against the storm damage and erosion to the village has been a specially erected sea wall.

The wall has been undermined by waves over the years and is need of major repairs , and archaeologists now fear that rising sea levels may prove too much.

Alice Lyall, Historic Scotland’s World Heritage Site co-ordinator, said: “It’s done a really good job, but if there is increased storminess – because it is storm events that concern us in particular there could be a problem.

“Already, if you have a north-west wind and a high tide, parts of the archaeology, just what used to be a visitor centre hut.”

According to the latest figures, 46 per cent of people who visit Orkney each year go to Skara Brae.

The number of cruise ships stopping there are increasing each year, making the site integral to the island economy.

Ms Lyall believes the site is being well cared for, but added: “We can’t say ‘in that case it’s fine we don’t have to keep reassessing’ because things can change.

“We are not resting on our laurels. If you went back 25 years you would not get many cruise ships stopping here, but they are increasing year on year, bringing other pressures.”

It states dangers to the historical site include “increases in storminess and sea level rise and consequent increases in coastal erosion; torrential rain and flooding; changes to wetting and drying cycles; and changes to flora and fauna.”

In addition to the village, the site includes Maeshowe, the Ring of Brodgar, the Standing Stones of Stenness and other nearby sites.

Unesco said the monuments “proclaim the triumphs of the human spirit in early ages and isolated places” and “stand as a visible symbol of the achievement of early peoples away from the traditional centres of civilisation.”

Julie Gibson, Orkney’s county archaeologist at the University of the Highlands and Islands said it was vital to look at ways of reducing further damage.

She said: “There are significant threats and there should be planning to reduce these risks.

“I don’t know how we manage a big surge from the sea, they are dangerous because they could suck walls out with them as they retreat.

“Under the Dunes, to the south of the excavated remains, there are other parts of the village. We need to continue to protect, but we have to look at alternatives.

“Two hundred years from now it’s entirely possible it could be entirely unsustainable, and if we get climate changes, and sea levels rise, then it could be much sooner than that.”

Skara Brae was discovered in the winter of 1850, when a severe storm hit Scotland causing widespread damage and over 200 deaths.

In the Bay of Skaill, the storm stripped the earth from a large knoll, known as “Skerrabra”, when the storm cleared local villagers found the outline of a number of stone buildings – thought to be occupied in 3180 BCE-2500 BCE.

In 1942 another violent storm swept parts of the monuments, prompting Edinburgh University academic Professor Vere Gordon Childe to carry out a fuller investigation.