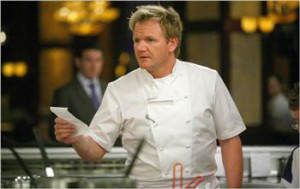 The celebrity chef was asked by a follower on Twitter to name his favourite chef. He replied “Breaking Bad”.

The cult series charts the rise and fall of a US chemistry teacher who “cooks” crystal meth to support his family after he is diagnosed with terminal cancer.

One of Ramsay’s fans joked that they would pay good money to watch him and “Heisenberg” cook together.

Ramsay wrote: “Can you imagine?”

Alex Davis asked:  “I wonder which one of you would attempt to kill the other first.”

Breaking Bad, which is shot on location in Albuquerque, New Mexico, became one of the talked about television series of all time as it reached its dramatic finale last year.