AN escaped Kookaburra was serenaded with a CD of bird noises yesterday in a desperate bid to tempt it down from its treetop hiding place.

The on-the-run meat-eating bird was spotted hiding in the top of a beech half a mile from the Scottish zoo it escaped from on Monday.

Attempts to capture Chuckles with dead chicks failed and the artful avian flew down, snatched the treats and promptly escaped back into the branches again.

The crafty bird approached keepers to investigate but retreated to its treetop vantage point before a net could be deployed.

The  Australian native – which laughs like a maniacal human – escaped from the zoo on Monday morning after its enclosure was damaged by high winds at the weekend.

Despite being the subject of a popular nursery rhyme, the bird is anything but cuddly and is known to attack and eat smaller birds.

The carnivorous bird’s distinctive call and dominant blue patch on the wings, was spotted by a local who reported the sighting to the zoo. 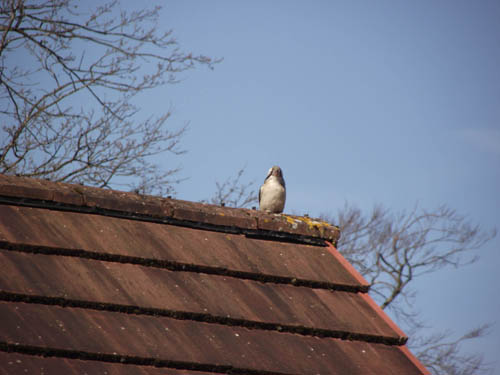 A spokeswoman for the Zoo said: “A local man physically came to the zoo to let us know that he had spotted Chuckles  in a beech tree, half a mile away.

“Staff jumped in a car and headed up to the area straight away.

“We enticed him with dead chicks and he came down, took the food but flew straight back up there.

“So then one lady who visits the zoo regularly suggested we play him kookaburra noises to try and entice him out of the tree.

“We have a CD and some speakers and we are playing the noises this afternoon.

“We played him the music through a stereo and again he came straight down but we haven’t managed to catch him.

“He is certainly liking the noises though.

“We’ve got three staff up there now trying to get him to come down.

“We don’t want to frighten him but he must be getting hungry and missing his home.

Zoo staff are standing guard with a net should the elusive bird make a move from his treetop hideaway.

“We think that when he gets hungry again he will come back down and we can grab him then.

“Hopefully the sounds will entice him to come down and we can catch him, put him in a suitable bird box and bring him back to the zoo safely.” 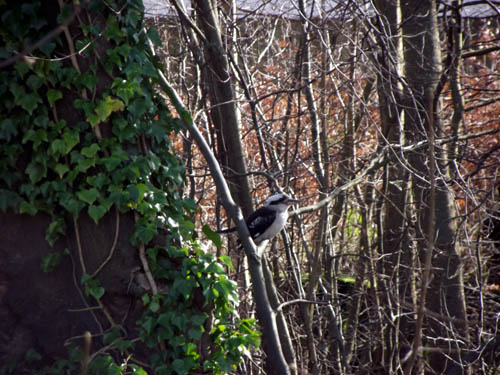 “We had some pretty bizarre winds.

“We generally go round and do safety checks – we thought everything was fairly well held down.

“But gusts of wind must have caught the roofing of the house he shared.”

The birds are known to eat other birds along with mice, snakes and small reptiles but when in captivity, they are often fed food for birds of prey.

The carnivore, which is around 45cm long, will not try to attack animals which are bigger than him.

The zoo is recovering from a devastating fire in April last year which killed dozens of animals.