A RADIO presenter needed hospital treatment for head and facial injuries after he was attacked in the street – by a vicious seagull.

Gary Robinson was left drenched in blood and needed stitches to his face and forehead after he was dive-bombed by the gull.

The Dundee-based morning show presenter also suffered a broken nose after panicking and face-planting the pavement. 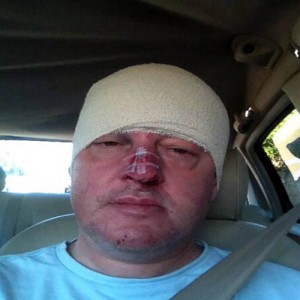 Gary, who works for Wave 102, said: “I sensed something hovering over me.

“Then all of a sudden the gull started swooping and dive bombing while making these squawking noises.”

He added: “It was relentless. I wasn’t eating anything at the time. I think they must have been nesting nearby.

“I just panicked. In my haste to get away from it I tried to cross the Perth Road, fell over my feet, forgot to put my hands out and landed face first.”

Gary said a woman came to his help.

“She thought I’d been mugged,” he said.

“My T-shirt was drenched in blood from the cuts to my face.

“All I was thinking about was ‘who is going to do my show at 6am?”

“Now I want to warn other people about these seagulls. They are quite aggressive at the moment, particularly if they are nesting.

He added: “Honestly I am reviewing where I park. I don’t want to tempt fate by walking past there again.” 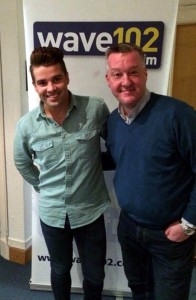 Liberal Democrat councillor for Dundee West, Fraser Macpherson, urged people to contact their local councils if they are having a problem with the menace birds.

He said: “If you stop seagulls breeding for two consecutive seasons they will go away so the animal control team have been accessing the nests to remove eggs and returning the next season to do the same.

“I would therefore urge people who are bothered with this problem to contact the council experts.”

In March. Catherine Kelly, 59, from Glasgow took legal action against company Riverside Inverclyde (Property Holdings) to court after she was injured when a seagull started to fly at her.

Ms Kelly raised action for damages after she suffered injuries from falling as she tried to escape the attack. The company denied that they did not take sufficient care of her safety.

Last month residents in Newhaven, Edinburgh were forced to use umbrellas to protect themselves from dive-bombing seagulls.

The birds, which are nesting on many of the roofs in the area, had become particularly aggressive and began swooping at locals at they walked along streets.

In 2012 Edinburgh Council revealed that they had spent around £25,000 on removing seagulls from suburbs.

In the same a number of Scots councils stated they were using fluorescent “fire gel” to trick seagulls into thinking buildings were on fire so they would avoid nesting on them.

Other councils have employed marksmen to shoot gulls.

In 2002 Wilfred Roby, 80, from Anglesey, Wales, died of a heart attack after being attacked by a seagull outside his home.

According to neighbours the former ambulance driver had been cleaning bird droppings off his garage roof when he disturbed a nest of chicks.

After the parent birds began to swoop Mr Roby fell to ground where it is believed he had a heart attack and was pronounced dead at the scene. Neighbours said the birds had continued to peck him as he lay unconscious.