POLICE officers have been warned that CS spray may not work on people with a “positive mental mind set.”

A 15-page dossier issued by Police Scotland also stated that the incapacitant spray would not work on dogs, and said officers should not smoke when carrying the spray.

The ‘CS incapacitant spray – issue, use and storage’ document includes sections telling officers that they should not use the spray when in crowded areas to avoid “panic.”

Politicians have branded the dossier not fit for purpose and said it made it “almost impossible” for officers to follow all the rules.

According to the “internal document”, obtained through a Freedom of Information request, CS spray will not work against people who suffer “serious mental disorders,” have been drinking alcohol, or if they have a “positive mental mind set.”

It reads: “CS incapacitant spray will not work in all cases. Failures have been noted on three categories of subject: People with serious mental disorders, people under the influence of drink or drugs and people with positive mental mind set/goal.”

It added: “CS sprays do not affect animals in the same way as people. It is ineffective on dogs.”

The document advises officers how to use and store the spray, and procedures which must be followed after the spray is used.

On page 11 officers are advised that they should not smoke or “carry lit materials when carrying CS incapacitant spray.”

Police officers are also told where they should stand and that they should not spray “up-wind” as this would result in spray back and could lead to injury.

The document also advised that CS spray should not be used “in situations where large numbers of the public are present” as it has the “potential to cause panic.”

It states: “At a distance of less than 1 metre (3ft) the officer must be aware that there is a risk that the pressure exerted on the eye by the spray can cause hydraulic pressure injuries to the subject. Although there will clearly be conditions under which this may be justified, the officer should consider this risk in their dynamic risk assessment prior to deploying the spray.

“Where possible officers should attempt to spray downwind (i.e. with the wind). Spraying upwind (i.e. against the wind) may cause a blowback that could affect officers or members of the public (cross contamination).”

It adds:“The spray should be aimed directly at the subject’s face.”

It further advises that anyone who comes into contact with the spray should be given an ‘advice notice’ about the after effects when they are released from custody. 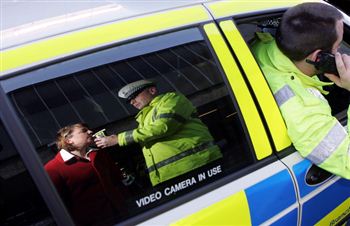 According to the dossier anyone who has been arrested or detained after being sprayed must be regarded as a “special risk prisoner.”

If the spray is used inside a building the owner or occupier will also be issued with a notice advising them of “decontamination procedures.”

While if the spray is used in a shop Police Scotland advise that any produce suspected of being contaminated by the spray should be removed from display in the shop.

The document, available to officers on the police intranet, states: “Generally foodstuffs, unless sealed in packaging, should be destroyed.”

Police officers are also told that anyone whose clothes have come into contact with the spray must be given a “paper suit” while their clothes are “sealed in polythene bags” to prevent contamination.

After a subject is restrained by officers “priority must be given to their aftercare.”

This includes giving the person “reassurance that the effect of the spray is temporary” and instructing them to “breathe normally” as this will “aid recovery and prevent hyperventilation.”

“The information document clearly is not so useful, with a range of suggestions that appear almost impossible to follow and observe.

“It is another example of a document Police Scotland needs to look at to make sure it is fit for purpose.”

” All officers who use CS Spray receive an initial full practical training course during which they are required to show competence in its use. This initial training is reinforced through annual requalification training to ensure that if they need to use this device, they continue to do so in the safest possible manner.

“The reference to a positive attitude rendering the spray ineffective is taken out of context. It is intended to inform officers that the spray may not immediately effect a person who is positively determined to inflict harm on another person. Given their potential state of mind they may suffer the physical effects of the spray but may temporarily ignore them. Officers involved in such an incident where this happens need to be alert to the possibility of using another method to subdue the individual.”