COUNCIL chiefs have been condemned for spending £1.3m on a building that will celebrate Scottish stone quarrying – and then using Spanish slate for the roof.

Instead of using the local West Highland slate, Argyll and Bute Council are shelling out to have roof slates shipped from more than 1,500 miles away.

The roof of the new community heritage centre, on the remote Isle of Luing, will be constructed using slate from San Pedro De Trones in northern Spain.

Planners have over-ruled local legislation to use the foreign slates, which can cost as much as £800 a crate.

In a bizarre twist, the centre will even be built on a slate quarry, replacing its former engine house.

Residents are infuriated at the plans, which they have called “absurd” and “a travesty”.

But the developers say Scottish slates are “second-hand” and would cost more to look after.

The Atlantic Islands Centre is being built in the main village of Cullipool to promote regeneration of the island, which has a proud slate-quarrying past.

It will serve as a community hub and tourist attraction and will include a heritage gallery, a cafe, and computers for public use.

The project was funded by cash from the National Lottery, the Scottish Government, and the EU regional development fund.

Locals are infuriated that Argyll and Bute Council’s planning committee have removed a condition stating that the building must be roofed using local slate.

Edna Whyte, an internationally-renowned artist who lives in the village,said: “It’s absolutely absurd and has caused uproar here. The island has a rich quarrying past. People who come to visit would expect the heritage centre to be roofed in local slate. 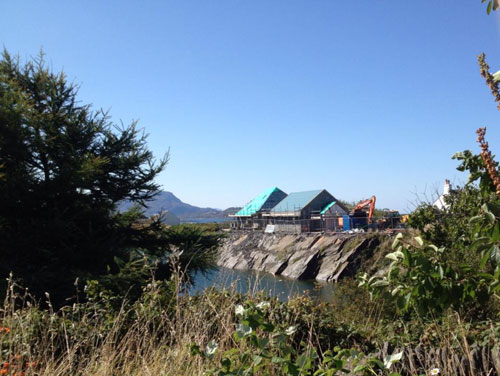 “Spanish slate is a lot darker. It would look ridiculous.

“I recently had an extension which used West Highlands slate, and I have been told by builders that it is readily available.

The 84–year old added: “Cullipool is a unique place – there are less than 200 people here. There’s nowhere else like it and we should celebrate that.

Locals commenting on an online community newspaper have slammed the proposal to use foreign slates, comparing them tocheap goods made in Taiwan.

Robert Wakeham said: “It doesn’t matter how many people manage to kid themselves that slate from somewhere else ‘will do’ – it won’t.

“It would be like a miniature Swiss penknife that I once bought as a souvenir in a cafe at the top of a Swiss mountain. Oncloser examination it turned out to be made in Taiwan.”

Malcolm Kirk said: “What could be more exceptional than celebrating the history of the local slate quarries and the people who worked there?”

Andrew Pinkerton, Project Development Manager for the build, has defended the decision.

He said: “Scottish slate hasn’t been produced since the 1940s, so any West Highlands slate that we used would be second-hand.

“There was a democratic process and it was decided that Spanish CUPA Heavy 3 slate, which is already used across Scotland, would be the best option.

“The centre is a £1.3bn investment in the area and will be an enormous benefit to people.”

Normal Bissell, vice chairman of Isle of Luing Community Trust, the group behind the centre, said: “The guidance from Historic Scotland is that West Highland slate should not be used to roof new buildings and the member of Isle of Luing Community Trust do not wish to place a long term burden on future generations of the cost of repair and maintenance of recycled West Highland roof tiles.”