A LEGAL high user was caught on CCTV unleashing a torrent of racist abuse at an Asian shopkeeper before urinating outside the door.

Father of one Kristopher Rorrison was jailed for six months yesterday (wed) in what a sheriff described as a “bizarre and concerning” case of “running riot”.

Edinburgh Sheriff Court heard how the 20-year-old used legal highs and got so drunk he had no recollection of events. 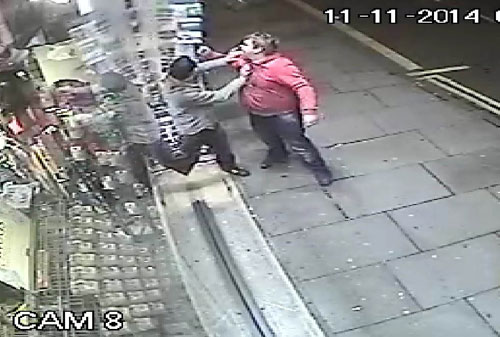 Rorrison first made a bungled attempt to steal from the shop by trying to stuff items down his front.

When the chocolate bars and crisps kept falling out of the bottom of his hoodie he was ordered from the shop.

CCTV images released by the shopkeeper show Rorrison in the street shouting through the glass, calling the shopkeeper a “P*** b******” and a “black b******”.

Rorrison can then be seen pulling over a postcard stand before urinating at the doorway. Shortly afterwards he is seen tucking in to a bag of chips bought by a friend. 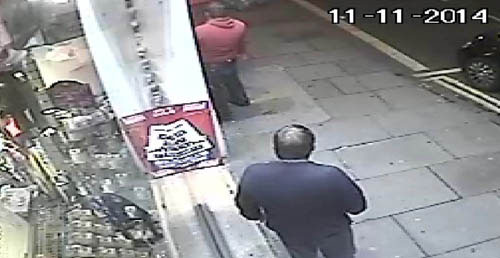 Rorrison, who has been in custody since November 18, pled guilty to a charge of theft and racial abuse and was given two three month sentences to run concurrently.

“His memory is not clear as because he had been taking alcohol and legal highs.
“One positive thing about him being in Polmont [Young offenders institute] – he hasn’t had access to that.”

Mr Cannavan said Rorrison had never been in trouble law until 14 months ago since when there have been six complaints.

He said: “Clearly there are issues in the last 14 months that need to be addressed.”

Sheriff Kenneth Maciver told Rorisson: “You were running riot in November – it appears to be caused by a combination of abusing alcohol and drugs. There is mention of amphetamines and legal highs.”

He added: “I am going to give you another chance but not the type of chance you would want. I am going to impose a custody sentence.It will be a short period. It will hopefully serve as a lesson.

“Your behaviour must improve.”

The owner of the Costcutters in West Maitland Street, Waqar Akhbar, released the CCTV of the incident as a deterrent to others.

He said: “I think that’s justice done. He was trying to steal from the shop and being racist.

“This will teach him a lesson for the future. People who steal from the shop will know that they can get caught.”